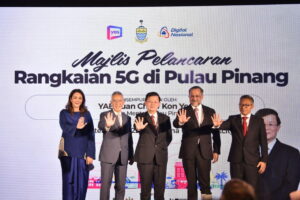 5G rollout in Malaysia has hit another milestone today as the new generation cellular technology is now officially available in Penang. The northern state is the third state outside of Klang Valley to receive 5G after Johor and Perak.

Given the announcement today, the 5G coverage map on Digital Nasional Berhad’s website has subsequently been updated as well. Based on what we brief look at the map, the current 5G implementation at Penang seemed to focus on the eastern side of the island.

In general, the 5G coverage was made available in various parts of Georgetown, Tanjung Tokong, Jelutong, Gelugor, Bayan Lepas, and Batu Maung. For the Seberang Perai side of the state, it is limited to the Penang Port area at Butterworth for now.

The Chief of Penang, Chow Kon Yeow revealed that the first phase of 5G deployment in Penang has covered 151 sites with 58 of them involving new infrastructure. On the other hand, the remaining 93 are existing sites that only required technology upgrades.

Kon Yeow also said that the second phase of the deployment will take place in early 2023 at 235 locations within Seberang Perai. In the same phase, the 5G deployment will also involve 77 structures on the island part of the state with a focus on its northeast district.

For those in Penang, you might be aware that the only telco that has deployed 5G service in Malaysia to end uses is YTL Communications. Hence, the only way you can utilize 5G in areas that we have mentioned above is through the Yes 5G plans which currently start at RM30 per month for prepaid and RM 58 for postpaid.

All Yes 5G plans currently offer unlimited 5G without any speed and data cap although, for the Prepaid FT5G plan, there is still a 7Mbps speed limit when you are connected to 4G. So, the main difference between these plans is their hotspot quota which ranges from 9GB to 100GB per month.

The post 5G Is Now Officially Available In Penang appeared first on Lowyat.NET.