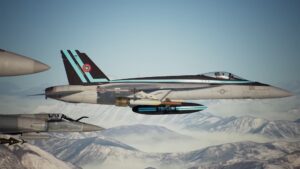 Ace Combat 7, the latest installment of the series is getting new DLC. It done so every few months since its initial release back in 2019, but this time it’s something for fans of the Top Gun films. More specifically, a couple of fighter planes from the game are getting skins to make them look more like the ones featured in the upcoming Top Gun: Maverick.

The special collaboration will feature a F/A 18E Super Hornet with maverick’s livery with a unique insignia. In addition, there will also be an F14A Tomcat with Maverick and Goose’s names under their respective cockpits.

This Top Gun: Maverick collaboration DLC for Ace Combat 7 will be out on 26 May. Which is just a little after the movie itself premieres locally. Though it’s not yet clear if these will be free DLC or something that you have to pay for. It’s likely to be the former, but the latter remains an ever looming  possibility, considering the fact that this game is absolutely overflowing with paid DLC.

While we’re on the subject of Ace Combat 7 DLC, a lot of it consists of nostalgia bait. In other words, a lot of them are insignias, paintjobs, or even outright planes, that have made appearances in past games, but not in this one. Whatever the reason for their exclusion, only the planes themselves are gameplay affecting items. Which is a little scummy when you consider that the game has a PVP multiplayer mode.

So with that in mind, if this Top Gun: Maverick DLC turns out to be free, then great. If not, but you absolutely must replace the in-game playable protagonist Trigger with Maverick, then be prepared to shell out somewhere between RM21 and RM25 for what will likely be a pack containing all the collaboration specials.