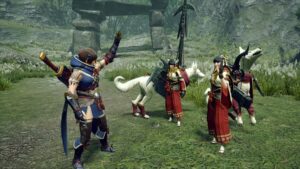 Last week, Capcom announced that with the Sunbreak expansion of Monster Hunter Rise, the game will introduce NPC hunter companions. While the details have not been fully revealed, these will presumably help fill up the four hunter slots per hunt.

Rise is already generous enough that, in addition to introducing Palamutes as an additional assistant, you can have up to two of any combination of animal pals to join you in your hunt. You can even bring one along with you for online hunts. Now that AI hunters will be added into the mix, you can fill out the standard four-man hunting party while remaining completely offline and keeping it a singleplayer experience.

On the surface, this is really great. There are a few obvious benefits to the feature’s inclusion, especially on the gameplay front. But I couldn’t help but have very mixed feelings about it. The good that it will being is immeasurable, but at the same time, so can the harm it will bring to the multiplayer community.

But let’s start with the good. More than likely, this will benefit hunters who play on the Nintendo Switch, but it will also benefit PC hunters with spotty or bad internet. The fact that solo hunters can get help – and better help, one can argue – in their hunting party while offline is good news for those who do not have the time nor commitment to “git gud”.

If you’re a hunter who already knows what you’re doing, sometimes you may just want to get a single hunt out of the way while in transit. In such situations, getting more and better help will speed up the process. Or, sometimes you just want the full hunting party experience. And with Monster Hunter Rise adding more contextual dialogue for hunters automatically, that’s all the more reason to use hunters over Palicoes or Palamutes. Not only is it more thematic and flavourful, it can actually be helpful, especially if you’ve had a split-second lapse of attention and missed a monster attack’s windup animation.

And if you’re going to play Monster Hunter Rise: Sunbreak on the Nintendo Switch, you can experience all the above without having to pay for the Switch Online subscription. That alone is a major plus point if, like many, you find its price-to-value proposition a bit on the poor side.

So that’s it for the benefits of having NPC hunters joining players in offline hunts. But what about detriments? Here’s where we really dive into the rabbit hole. And to kick things off, I would suggest that these AI hunters will aid in the development of bad habits in players.

To start, the short trailer that showed off the feature also revealed that the AI is capable of using Lifepowders or Dusts of Life healing items. It remains to be seen if they use this at random, or only when the player is at low health. The use frequency is also an unknown for now. But either way, this could lead to players who have an over-reliance on others taking care of them. Then when they go online, they inadvertently expect the same treatment from other players. Then turn up the unpleasant feeling if said player happens to be a toxic person.

This will only get exacerbated the more different types of items these AI hunters use, and the more frequently they use them. We’ve already seen this with Monster Hunter World to some extent – players who are new to the series realise the power of flash bombs against flying monsters abuse them to death, only to struggle and also make the experience worse for everybody when encountering Tempered monsters.

To a lesser extent, hunters who are too used to having AI teammates may also refuse to go online altogether. Which, ironically, would be an appealing option if the alternative is to play with spoilt players who play recklessly, and only demand you heal them but never bother to return the favour.

Put these two factors together, and you have a smaller online community of more socially adjusted hunters. Which would be a shame because while Monster Hunter as a series always demanded skill from its players, a large portion of the fun to be had once you’ve gotten good is to simply goof around with other skilled hunters and doing things in less orthodox ways.

This wouldn’t affect you too much if you have a group of friends who are dedicated hunters that you can call on to help you relatively consistently. But that’s not something that everyone can say that they have.

While there’s no doubt that AI-controlled hunter allies in Monster Hunter Rise: Sunbreak is a boon, it’s also a double-edged sword. And that false edge is likely to hurt inexperienced players more than help in the long run. Though there is a way to mitigate this risk. And that is to only introduce it to hunters that make it to Master ranks, which will likely be the case anyway since it’s part of the Sunbreak expansion. This ensures that only players who have proven that they know what they’re doing, and by extension are less likely to develop bad habits, gets access.

When Capcom deigns to announce the next Monster Hunter entry, it’s possible that AI hunters will make a return. And since it’s tradition that the games release with only Low and High ranks pre-expansion, AI hunters should be locked behind High rank instead, if they do indeed return.

Monster Hunter Rise and its Sunbreak expansion has been the kindest to newcomers of the series compared to the games that came before. First it was the introduction of the Palamutes, and soon, NPC hunter companions will be a thing. And as much as I think it could be a detriment to newer players coming it, the potential for good is just way too hard to ignore. Here’s just hoping that people approach the new feature with the right mindset, rather than use it like a crutch. There has been plenty of that in gaming, especially from the crowd that loves conflating difficulty with accessibility.

And on that bombshell…

The post AI Hunters In Monster Hunter Is A Great Idea, But… appeared first on Lowyat.NET.