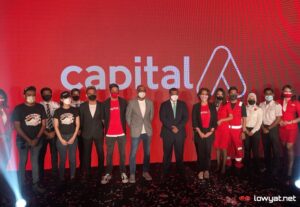 AirAsia Group has officially changed its name to Capital A following the recent approval by its shareholders. The new name is meant to reflect the group’s current aspiration which has since gone beyond its airline business.

As air travel was extensively grounded for the past two years due to the global COVID-19 pandemic, the company has put more focus on its non-aviation businesses. Alongside the massive push for the AirAsia Super App, it has led to the establishment of new services such as AirAsia Grocer (formerly known as AirAsia Fresh), AirAsia Food, AirAsia Beauty, AirAsia Money, and AirAsia Ride.

Today’s announcement does not mean the company will stop using the AirAsia branding though. The switch to Capital A is only for the main holding company while any products that have AirAsia branding in them will remain as they are at the moment.

Alongside the new name, Capital A also said that it expects 50% of revenues to come from its non-airline businesses within the next five years. In the same duration, the company also aims to have 75% of customer transactions take place through AirAsia Super App alongside 21.3 million monthly orders for AirAsia Grocer and 10 million monthly active BigPay users.

As for its aviation group, Capital A is looking to connect more than one billion people throughout the Southeast Asia region via its airlines by 2026 while working to have Asia Digital Engineering as a key player in the regional aviation maintenance, repair, and overhaul industry. Its logistics arm, Teleport has also been tasked to capture 10% of the cargo market share in this region as well as 9% for the delivery market share.

Last but not least, AirAsia Academy also aims to have 5 million signups from now until 2026. All of these targets seemed rather ambitious for a company that recently has received Practice Note 17 (PN17) classification from Bursa Malaysia but its CEO, Tony Fernandes said that the classification has no effect on Capital A and has also highlighted the fact that it managed to raise RM 2.5 billion in funding last year with another RM 1 billion is already in the works.

On a related note, Tony has also revealed that AirAsia Super App is currently working to launch a subscription service called Unlimited. You can check out our previous report right here for more information regarding the upcoming service which is currently being prepared to launch in March.