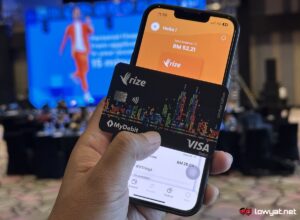 However, Rize is not meant to replace alrajhi@24seven though which is ARBM’s existing digital banking app. Instead, it is a separate digital banking platform altogether to the point that you have to own at least one account with another bank in Malaysia before you can actually open a Rize account.

The new platform delivers all of its services solely through the Rize mobile app. This also applies to customer support which has a dedicated team that operated 24/7 according to the CEO of ARBM, Arsalaan Ahmed.

Based on what we have seen during its official launch event earlier this month, ARBM seems to put a huge emphasis on speed when it comes to services on Rize. For example, the bank claimed that it took only five minutes on average for a customer to sign up for a Rize account although do note that you need to transfer a minimum of RM20 to the account in order to activate it.

ARBM also said that Rize’s Personal Financing-i scheme only requires 15 minutes from the point when a customer begins filling up their application to having money in their account. With no processing fee involved, the bank pointed out that there were only four steps involved in the application process.

Customers also have the ability to create up to three Savings Pots within their Rize account and since these pots support multiple contributions, they can rope in external parties such as family and friends to chip in easily. They would also receive profits for the savings in these pots which is something that ARBM claimed as the first in Malaysia.

Aside from having the need to have at least one account with other Malaysia-based banks, other requirements that a customer needs to meet before being able to open a Rize account also include being a Malaysian citizen with a valid MyKad as well as being aged 18 years old and above.

As Rize support DuitNow Transfer and DuitNow QR, customers should not face any issue to transfer funds in and out as well as making simple payments. The digital banking platform also has its Financial Insights section which identifies transactions through the use of AI and then groups them into specific categories.

For now, these are current core products and features that Rize has to offer to consumers but Arsalaan has assured that there will be more features coming to the digital banking platform very soon. One such feature is a marketplace customers will be able to obtain complimentary products and services that suits them.

The Head of Digital Bank at ARBM, Ikram Khaliq also pointed out that Rize customers will also receive tailored offers and discounts based on their financial habits. To celebrate the launch, early adopters of Rize will be provided with a limited-edition Visa debit card for their account.

In terms of availability, the new Rize digital banking app is now readily available through Google Play Store for Android users while owners of iOS devices can head on to the App Store. The app is also available for Huawei users via AppGallery.