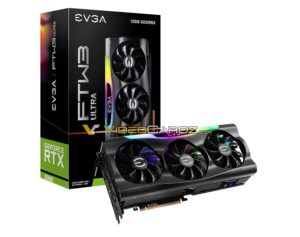 While NVIDIA is expected to announce the 12GB variant of the GeForce RTX 3080 tomorrow, that doesn’t mean that the internet hasn’t been posting leaked images purportedly belonging to the card. Case in point, a recently leaked image of the 12GB GDDR6X card custom-cooled by EVGA has made its way online.

At a glance, the EVGA-branded RTX 3080 12GB is part of the FTW3 Ultra lineup, meaning we can pretty much expect the same design language that comes with the brand’s lineup. This includes the same triple-fan configuration and layout, the same thick, 3-slot heatsink that covers both the GPU and its surrounding VRAM chips and capacitors, as well as that large aRGB LED strip located at the base of the card’s spine.

The RTX 3080 12GB is expected to ship out with an updated GA102 GPU, along with 8960 CUDA cores, which is 256 CUDA cores more than the original GeForce RTX 3080. Of course, it goes without saying that the biggest enhancement to the card is the additional 2GB of GDDR6X graphics memory. On that note, an increased number of CUDA core and graphics memory also means that the RTX 3080 12GB is expected to have an increased power consumption; the new card is expected to have a 350W TDP, meaning that the FTW3 Ultra variant could ship out with a higher TDP requirement.

In any case, the bigger and more obvious question at hand is whether or not gamers will be able to obtain a unit of the RTX 3080 12GB for themselves when the card officially hits store shelves. On top of that, it appears that NVIDIA will be lifting both the preorder and review embargo dates for the card simultaneously, which could spell supply trouble for the card.