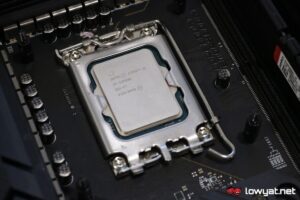 Intel’s 13th generation “Raptor Lake” processors have supposedly entered its internal testing phases. More specifically, its alleged Core i5-13600K, the mid-range processor of the series when it launches, is already undergoing testing, with some of its specifications having already appeared on Geekbench.

The leaked details of the 13600K was apparently spotted just hours after the CPU-Z Validator confirmed an engineering sample of the enthusiast-class Core i9-13900K. To be precise, the details of the mid-range CPU was posted on the benchmark and online repository, GeekBench.

According to the GeekBench page, the 13600K was testing using an ASUS ROG Maximus Z690 Extreme motherboard, along with 32GB of what we are guessing to be DDR5 RAM. Additionally, the processor also is showed to be housing 14-cores, 20-threads, which indicates that we could be looking at six Golden Cove P-Cores and eight Gracemont E-Cores.

Performance-wise, the alleged 13600K obtained a single-core score of 2012, while its multi-core score is currently listed at 16054 points. That’s a pretty high score and if this is to be believed, then the CPU’s performance is essentially on par with AMD’s own top-end Ryzen 9 5950X. For context, the latest review with the latter CPU indicates a single-core score of 1725 points and 17069 point for the multi-core portion.

To put into another perspective, the 13600K’s single-core score is also on par with the current 12th generation Core i5-12600K, with an average of 1750 points. However, it should be noted that the latter CPU’s multi-core performance doesn’t even come close to the performance of its alleged successor.

Beyond that, there are no further details about the Core i5-13600K and as far as we are aware, Intel has yet to set an official launch date for the lineup, let alone the mid-range processor itself. That being said, initial reports and rumours have suggested that the announcement could happen as early as the end of the year. Having said that, we wouldn’t hold our breath for it.