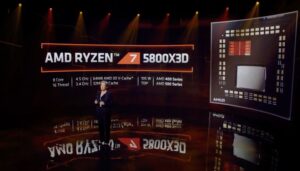 AMD’s Ryzen 7 5800X3D was the first CPU the chipmaker launched earlier in the year, serving the dual purpose of introducing and showing off the potential of its 3D V-Cache chiplet design. Having proven that the technology works, rumours are now suggesting that the CPU and GPU maker could be bringing it to lower-tier AM4 CPUs soon.

The rumour was first posted by the popular leakster Greymon55 (@greymon55), who initially claimed that AMD was currently working on new Zen 3D V-Cache products, and that more information about said CPUs could be divulged as early as next month. They then follow up that tweet with the statement that those products will include “low-end” AM4 products in the future.

It’s been rumored in the last few days that there will be several new products for ZEN3D. It’s true, and there will be further information next month.

Again, this is still all just hearsay, but given how successful and potent the 3D V-Cache technology was with the 5800X3D, it would definitely be interesting to just how far AMD would be willing to push the envelope with it. For that matter, a Zen 3-based Ryzen 5 CPU with its average 6-cores could stand to benefit immensely from 3D V-Cache, thus opening the market for affordable but powerful CPUs even further.

However, if the 5800X3D is anything to go by, it is quite possible that a Ryzen 5 or Ryzen 3 CPU with 3D V-Cache may only be designed to run as intended, out of the box and without the ability to manually overclock the cores, due to the limitations AMD is facing with the technology. Having said that, there is also a chance that the chipmaker could end up using its new and improved 3D V-Cache design for the supposed mid-range and entry-level Zen 3 Ryzen CPUs. After all, the company did promise that its upcoming Zen 4 lineup will feature a new 3D V-Cache design, one that will support overclocking.

Maybe use Zen 4 CPU die with 12nm existing IO die for AM4?

3D V-Cache designs aside, Greymon55 did loosely confirm that AMD did also have Zen 4-based AM4 CPUs in its labs, although whether or not those CPUs will enter mass production is yet to be seen. For that matter, there is still no official information or announcement by AMD on the subject, we recommend taking this with a very liberal sprinkling of doubt until then. However, the next few months are expected to be filled with AMD-based news, so maybe we” hear something then.