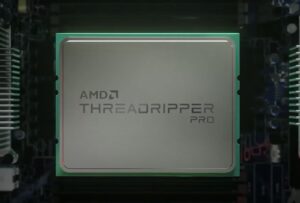 AMD recently announced its Ryzen Threadripper PRO 5000 WX Series processors, which are designed for the first time making it the first official sighting since the launch of its 3rd generation Ryzen Threadripper lineup in 2020. Unlike its consumer-ready brethren, though, these workstation processors are primarily tailored towards professionals.

Like the current non-HEDT Ryzen CPU lineup, the Threadripper PRO 5000 WX Series CPUs are based on AMD’s 7nm Zen3 architecture, meaning that they also benefit from an increase in base and boost frequencies. More importantly, because it is based on the Zen3 architecture, that also means that these processors are now PCIe 4.0 ready.

Unfortunately for the average consumer, AMD’s Ryzen Threadripper PRO 5000 WX series of processors will remain out of reach; at the current moment, the CPU maker is only making the lineup available through OEM partners and in this case, its first form of availability is via Lenovo and its ThinkStation P620, and will be purchasable from 21 March onwards.