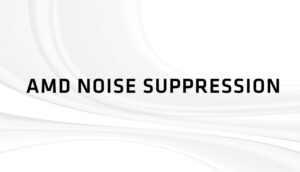 AMD’s latest Adrenalin Edition version 22.7.1 drivers are finally available and along with it, comes AMD Noise Suppression, a feature that we honestly weren’t expecting so soon. As per our initial report on the subject, Noise Suppression is a technology that does exactly as its namesake suggests and is a direct rival to NVIDIA’s RTX Voice noise cancellation technology.

As per AMD’s official statement, Noise Suppression uses real time, deep learning algorithm to help reduce background audio noise and should work for both input and output devices, removing any unwanted background noise captured either from your microphone or from someone else’s devices. In other words, it should eliminate the chopping noises being made from a fan that is blowing directly towards you on a very hot day, or even the sounds of someone being a little too loud for their own good.

As a quick primer, evidence of AMD Noise Suppression first cropped up at the start of the week, along with a short video clip that went offline shortly after, detailing the feature’s functions. Again, like NVIDIA’s RTX Voice, Red Team’s own noise cancelling technology should work more or less in a similar manner and will be accessible via Adrenalin Edition’s Radeon Overlay.

On that note, finding AMD Noise Suppression can be found very simply by accessing the Settings icon, and then navigating to the Audio and Video tab. It goes without saying that this feature is only available once you’ve updated the Adrenalin Edition drivers to version 22.7.1, at which point the option to activate the feature will be listed inside the tab.

On another note, it should be pointed out that AMD Noise Suppression is currently only available on AMD-based systems running on a Ryzen 5000 series or newer, and well as Radeon RX 6000 series GPUs or newer.

You can download the new AMD Software Adrenalin Edition drivers either from the AMD Software windows, or directly from the chipmaker’s official drivers and support page.