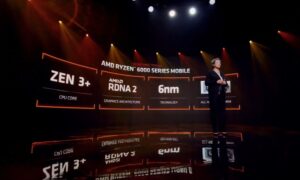 AMD kicked off its CES 2022 keynote with the official announcement of its Ryzen 6000 Series Mobile lineup. As per the title, the new series comprises processors that are designed specifically for use in laptops.

One important point to note about these processors is that there aren’t simply just CPUs but are, indeed, APUs. This is because all Ryzen 6000 Series mobile processors do not just house CPU cores; they’re also housing AMD’s powerful GPU cores based on the RDNA2 architecture.

Circling back to the CPU cores, the new Ryzen 6000 Series Mobile processors are based on AMD’s new and improved Zen 3+ architecture that in turn, are manufactured off of TSMC’s 6nm die lithography. The end results, on a physical level, at least, are APUs that are capable of hitting speeds of 5GHz, up to 1.3x faster processing, and thanks to the new RDNA2 GPU cores, twice the graphical prowess over its predecessor.

Not only is the Ryzen 6000 Series mobile processors powerful, AMD’s also built them to be smarter, more intelligent, if you will. That’s all due to a total of 50 new and enhanced power management features, as well as a new performance-per-watt efficiency brought about by the new 6nm process. As if that wasn’t enough, AMD also partnered up with Microsoft to integrate its processors with the latter’s new Pluton technology, all in the name of boosting the security within its processors.

Of course, AMD has also brought the Ryzen 6000 series up to date in other areas as well. With the new chipset, laptops fitted with the brand’s new APUs will gain access to the new USB4 standard that facilitates transfer speeds of up to 40Gbps; access to DDR5 RAM with speeds of up to 4800MT/s and LPDDR5 memory kits at speeds of 6400MT/s; and access to Wi-Fi 6E, as well as Low Energy (LE) Bluetooth 5.2.

Oh, and AMD also says that its new Ryzen 6000 Series Mobile processors will be capable of providing up to 24 hours of battery life for all future laptops fitted with its APUs, thanks on no small part to the optimised 6nm process, as well as new power management features and Adaptive power control framework.

AMD’s Ryzen 6000 series Mobile processors are slated for availability via AMD Advantage Edition gaming laptops from February onwards. The new lineup will be categorised into two subsets: The U-Series that caters towards powerful thin and light laptops, and the H-Series which will target gamers and content creator through more powerful gaming laptops.