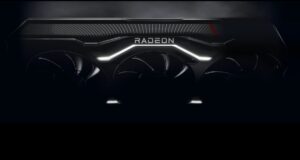 AMD’s RDNA3 GPU architecture has clearly been the subject of much speculation, especially amongst GPU enthusiasts that are long-time followers of the alternative to NVIDIA’s own GeForce GPUs. Well, at the end of its Ryzen 7000 Series launch AMD gave the press a very, very small teaser of the architecture, and of its endeavours within the Radeon division.

The small nugget of information about RDNA3 – again, we cannot stress just how minor the details were – GPU architecture was basically Lisa Su, CEO of AMD, giving a small update about the progress the Radeon division has made. One breakthrough that the Dr. Su was happy to share with us was its performance threshold and design.

Design-wise, the RDA3 GPU will be using AMD’s new chiplet design. Dr. Su also said that, by comparison to the current RDNA2 architecture, fans and consumers could look forward to as much as a 50% increase in graphical performance over the last generation. However, it is unclear if this performance uplift is simply in reference to its naked performance or if it actually factors in the inclusion of other features like real-time ray-tracing, sub-surface scattering, or even AI upscaling.

There was no showcase of hardware either, save for the stylised picture of what was clearly a reference cooler, complete with fins of the heatsink that were accented in red: a very clear reference to the RDNA3 architecture. In fact, the only showcase AMD was willing to use to show off its prowess was a very brief technical demo of the card, using the recently announced Dark Souls-inspired title, Lies of P.

AMD officially confirmed during its Financial Analyst Day 2022 back in June that its RDNA3 technology was on track for launch this year. Much like the Ryzen 7000 Series, the new GPU and its “Advanced Chiplet Packaging” will be based on the 5nm die lithography, undoubtedly provided by TSMC. Additionally, the GPU will also feature a “next generation” Infinity Cache.

The post AMD: RDNA3 Will Be 50 Percent Faster Than Predecessor appeared first on Lowyat.NET.