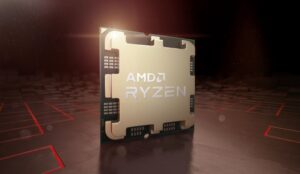 AMD’s Ryzen 7000 series is finally out in the open, having been announced during its Computex 2022 keynote. As the follow-up to the chipmaker’s current Zen3, the new processor lineup officially introduces the new Zen4 CPU architecture and with it, an all-new AM5 socket, 600 series motherboards, and access to PCIe Gen5.

Specifically, the new Zen4 architecture has twice the L2 Cache per core at 1MB, more than 15% uplift in single-threaded performance, and gaming clocks of 5GHz or faster. Moreover, while the main Zen4 CPU core chiplets are based on the 5nm process node, it is also paired with an all-new 6nm I/O Die that also houses an integrated RDNA2 graphics core, along with DDR5 and PCIe Gen5 controllers.

As promised by AMD last year, another major change or shift in the AM5 platform is the transition from the Pin Grid Array (PGA) socket to the Land Grid Array (LGA) CPU socket. To that end, all Ryzen 7000 series uses an LGA socket with 1718 pins soldered into the motherboard.

Additionally, the new Ryzen 7000 series CPUs will support TDPs as high as 170W, which is quite a jump from the 105W TDP consumed by even the current Ryzen 7 and Ryzen 9 5000 series CPUs. That said, the higher power consumption can translate into the increased performance AMD is boasting about.

With AM5 also comes the introduction and not just DDR5 memory support, but also PCIe Gen5. Officially, the platform will support up to 24 PCIe 5.0 lanes, for both storage and graphics, up to 14 SuperSpeed USB 20Gbps and Type-C ports. In keeping with the times, AM5 also supports the latest Dual Band Simultaneous  (DBS) Wi-Fi 6E connectivity and Bluetooth 5.2 LE. Further, and thanks to the addition of integrated RDNA2 graphics cores in Ryzen 7000 series CPUs, the platform can easily support up to four HDMI 2.1 and DisplayPort 2.0 ports.

As per AMD tradition, the first batch of AM5 motherboards that will be released in tandem with the new Ryzen 7000 Series motherboards are going to be the X670 and X670 Extreme (X670E) series. While both series will be geared towards overclocking AMD’s new high-performance CPUs, the X670E in particular will be geared towards extreme overclockers and will also provide PCIe 5.0 support across the board, and not just be limited to storage and graphics like the X670 motherboards.

AMD will also release its B650 series motherboard lineup for the mainstream market. These motherboards will still support PCIe 5.0 but the interface will only be limited to Storage. Further, it looks like the motherboard series will only be made available slightly after the release of the X670 series.

AMD says that its Ryzen 7000 Series processor lineup and AM5 motherboards are set for availability this fall, meaning that we could see the products landing sometime between the third and fourth quarter of this year.