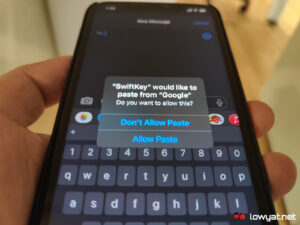 iOS 16 became available to iPhone users globally last week and its adoption rate is already faster than iOS 15, bringing in plenty of exciting features that include new customisation tools. However, one part of the new update seems to have inadvertently introduced a new and unexpected source of friction in using the operating system.

If you have updated your device to iOS 16, you may have noticed that the phone will constantly prompt you to allow a paste from one app to another every time you copy and paste text or content — to an annoying degree, at least for us. This seems to be a security feature that is meant to protect potentially sensitive data in your clipboard from apps that try to access it without permission.

Now, an Apple executive has confirmed that this is actually a bug and it is not how the iOS 16 feature was intended to work. Ron Huang, a senior manager at Apple, responded to an email from a frustrated user, addressed to Craig Federighi and Tim Cook, who complained about the frequent prompts. “This is absolutely not expected behaviour, and we will get to the bottom of it,” said Huang.

The executive added that while the company has not seen this bug in internal testing, he acknowledged that several users have been experiencing it. He also confirmed that a fix will be coming and that users should “stay tuned” for an update.

MacRumors reported that Huang is listed as one of the inventors of the privacy feature, which was patented in 2021. Theoretically, the prompt is not supposed to appear when it is obvious that the copy-paste action is from an explicit user action. The senior engineer did not elaborate on when exactly the fix will be rolled out to users, but hopefully, it is sooner rather than later.

The latest version of iOS 16 available for most eligible devices is 16.0 while the iPhone 14 and 14 Pro received the 16.0.1 update to address an activation issue. iOS 16.1 is currently being beta tested with developers and public beta testers, but it will likely be weeks before the stable version of the update rolls out.