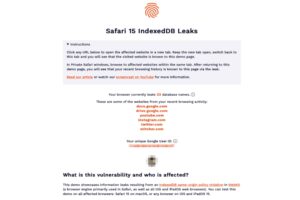 Earlier this month, we saw reports about a bug with the Safari browser on Mac and iOS devices. This bug made it so that, to put it really simply, your personal details may get leaked from the browser. The fix for this is now available via OS updates.

Apple has just released the iOS 15.3, iPadOS 15.3 and macOS Monterey 12.2 updates, which contains the fix for the Safari issue. They are all listed as bug fix updates, and one of the more prominent bugs getting fixed is the aforementioned Safari bug.

If you need a refresher, the Safari bug in question involves the implementation of the IndexedDB on the browser. The bug makes it so that if you have multiple tabs open at a time, it allows websites to collect data from any of the open tabs. This includes data relevant to other websites as well as browsing history which, when combined, could become identifiable data. Then there’s the matter of your Google account details, which can be identifiable by themselves.

Because these updates fix this issue, you should have them installed when you can. Also, as mentioned, while it’s a pretty major one, the Safari IndexedDB bug is not the only one that these updates deal with.