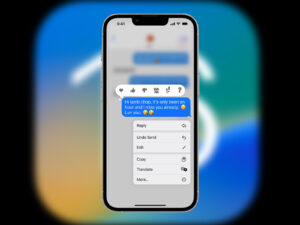 Apple has released the fourth beta for iOS 16, which comes with some changes to the upcoming features for iMessage. If you haven’t heard, the next iPhone update will see the Messages app able to edit and unsend iMessages after you send them through the Messages app.

Of course, the new features will have certain limitations to prevent people from abusing them. One of the modifications that Apple has made with the latest beta is reducing the time limit for unsending messages, tightening the limits even further.

Initially, the tech giant set the limit for unsending messages to 15 minutes when it was first announced. Now, Apple is giving users only two minutes after messages are sent to undo it. Once that limit has passed, users will have to live with whatever mistake they made. The ability to recover recently deleted messages within 30 days remains unchanged.

On top of the reduced time limit, Apple has also added an edit history, which the edit feature lacked in previous iterations. When you tap on an edited message, it will unfurl all the previous versions of that message. This addresses a previous concern where people could potentially send malicious messages and then alter them afterwards.

Each individual message is limited to five edits, after which the ability to change it disappears. Users are also limited to editing messages within 15 minutes after it was sent. If you are interested in trying out the feature before it officially rolls out, you can opt-in for the beta programme.