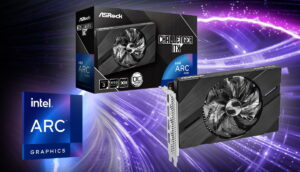 The Arc A380 marked Intel’s return into the desktop graphics card market which is a monumental challenge given how the company has to face the graphics titans that are NVIDIA and AMD. First revealed in China around three months ago, its availability outside the debut market is rather questionable though.

Hence, we were rather surprised that the ASRock Intel Arc A380 Challenger ITX graphics card has made its way to Malaysia. We first noticed it through an announcement by Achieva Malaysia, who is distributing the card in our market.

Built using TSMC 6nm process technology, the Arc A380 GPU is essentially the entry-level offering from the Intel Arc A-Series family. The GPU comes standard with two Render Slices which carry a total of eight Xe cores and eight ray tracing units together with 128 XVE vector engines that are responsible and 128 XMX matrix engine.

To cool down the GPU, ASRock has opted for its custom-designed striped axial fan that apparently can deliver enhanced airflow while keeping the noise level at a minimum. As per many modern graphics card out there, the fan on the ASRock A380 Challenger card would stop when the GPU temperature is low enough especially during idle period or going through light workloads.

While Intel’s spec sheet also noted that the Total Board Power consumption for Arc A380 is only 75W, that does not stop ASRock from implementing an 8-pin power connector into the card. It also features a HDMI 2.0b port alongside three DisplayPort 2.0 ports.

Price-wise, the ASRock Intel Arc A380 Challenger graphics card is available in Malaysia with suggested retail price (SRP) tag of RM799. For more information about the card’s in-store availability, try reaching out to your favourite PC hardware retailers across Malaysia.