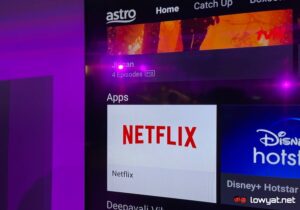 Astro recently added two more plans to its TV pack line-up in the form of Sports Plus and Movies Plus. Both of these plans actually followed the same strategy as per the Entertainment Plus Pack that was introduced in November last year.

This is because the “Plus” in their names is due to the inclusion of Netflix. Similarly, the Plus option also provides additional Korean content via tvN HD and K-Plus HD as well as the BOO HD horror channel.

For RM119.99 per month which is a promo price that lasts for the first 18 months, subscribers of the Sports Plus Pack would also have access to 83 base and 12 sports channels inclusive of the Astro SuperSport UHD channel. Naturally, the pack also covers all 64 matches from the upcoming FIFA World Cup Qatar 2022 in 4K HDR.

Aside from Netflix, the Sports Plus Pack also includes access to the beIN SPORTS Connect app. Subscribers would also receive the Astro GO+ add-on service which allows them to utilize the Astro GO app up to four screens at the same time

As for the Movies Plus Pack, it also carries a promo price of RM119.99 per month for a duration of 18 months. Together with the standard 83 base channels, the pack features nine movie channels as well as access to Astro GO+, HBO GO, and Disney+ Hotstar apps.

Meanwhile, do note that the monthly price for each of these packs will revert back to RM129.99 once the 18-month promo period is over. As noted in our report last November, Astro customers who receive Netflix as part of their subscription are being provided with its Standard plan which delivers Full HD 1080p resolution and simultaneous access to two screens.

If they prefer to watch Netflix on more screens and at 4K resolution, they can upgrade to the Premium plan that costs an additional RM9.43 per month through Astro. Last but not least, do also take note that the Astro GO+ complimentary access that we mentioned earlier only lasts until 31 January 2023.

The post Astro Injects Netflix Into Sports And Movies Packs Via The Plus Option appeared first on Lowyat.NET.