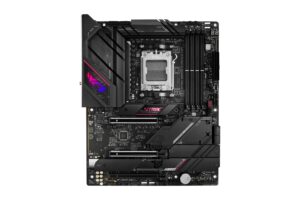 ASUS officially announced the launch of several new motherboards, all of which are part of the AMD B650 Series. As a quick recap, the B650 series motherboards are a part of the CPU and GPU maker’s AM5 chipset, which in turn uses an all-new LGA1718 socket.

Like AMD’s high-end and premium-tier X670 Series, ASUS’ B650 Series will be available in two tiers: the B650 Extreme (B650E) and the standard B650. Getting to the point, the Taiwanese brand’s latest mid-range motherboards can be divided into the following four lineups: ROG Strix, TUF Gaming, ProArt, and the Prime series. Starting with ROG Strix series, the lineup comprises a total of three new motherboard models, which are the B650E-F Gaming Wi-Fi, B650E-I Gaming Wi-Fi, and the B650-A Gaming Wi-Fi.

As the label at the end of their names indicate, all three B650 ROG Strix motherboards are designed to handle the latest Wi-Fi 6E connectivity standard but more to the point, they essentially provide gamers with options for a plus-sized motherboard, right down to the mini-ITX form factor with the B650E-I Gaming Wi-Fi.

Moving down the line, the TUF Gaming lineup is made up of two ATX and two mATX B650 motherboards, both of which contain a “Plus” and non-Plus mirror variant. Unlike the ROG Strix and in keeping with ASUS’ principles of maintaining a sleek, uniform, and militaristic aesthetic with this lineup, everything about these boards look about as rugged and edge-sharp as every other motherboard produced by the brand for this lineup.

Then there is the ProArt B650-Creator motherboard, which is the only B650 unit under the lineup. As its name suggests, this motherboard is aimed toward the professionals like engineers, creative designers, content creators and VFX specialists.

Last but not least, is the Prime B650 series. Like the TUF Gaming series, the lineup consists of four motherboards, comprising one “Plus” ATX model and three mATX motherboards. On a side note, only two of the three mATX boards will have Wi-Fi connectivity.

Regardless of the B650 models, all SKUs mentioned here are designed by AMD to support both the latest DDR5 memory standard and PCIe Gen5 SSDs. More importantly, they also will support Ryzen 7000 Series overclocking.

At the time of writing, ASUS did not mention local availability or pricing.