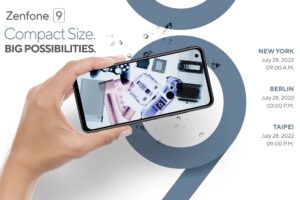 Last week, ASUS accidentally revealed the Zenfone 9 in a promo video that went up too early. Seeing that the cat is already out of the bag, the company has now announced that it will be launching the phone in two weeks’ time.

ASUS took to Twitter to announce the launching of what the company calls “the most grabbable Zenfone 9 ever”. Fitting, perhaps, considering its size, but the phrase definitely needs some work regardless. The launch will be a live stream on one of the brand’s social media platforms, though which one has yet to be specified.

Also in the tweet are three different launch times for countries in different timezones. Conveniently, they all fall on the same day, which is 28 July. As for time, the launch will take place at 9PM local time since we share the  UTC+8 timezone with Taipei.

As previously revealed, the ASUS Zenfone 9 will come with a 5.9-inch AMOLED display with 120Hz refresh rate, a Qualcomm Snapdragon 8 Plus Gen1 chipset, and a 4300mAh battery. For its main camera setup, one will be a 50MP shooter, though details of the other one has yet to be revealed. Other features the phone will come with is the increasingly rare 3.5mm audio jack, an IP68 rating, and a side mounted fingerprint sensor with gesture controls.

There are some details on the ASUS Zenfone 9 that are still missing, like the resolution of the display and the pixel count of the second camera at the back. Possible RAM and storage configurations have also yet to be revealed. But these will likely be revealed during the official launch two weeks from now. This will be especially the case the for latter, since device prices are frequently tied to these. Speaking of prices, hopefully the company also reveals local pricing and availability details during the official launch.