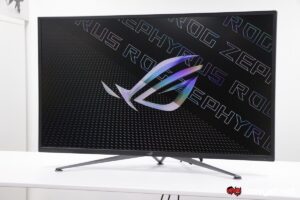 ASUS’ ROG Strix gaming monitors lineup is vast and wide enough that, suffice to say, gamers can dip their hands into the pool and pick out something that suits their needs. In the case of the ROG Strix XG43UQ, I find myself a bit divided over two issues. The first is practicality. The second point? Just exactly to whom this display is being catered.

On paper and in person, the XG43UQ is a huge display. At 43-inches wide, this gaming display takes up a good deal of space on any desk, let alone mine. Ultimately, though, ASUS created this gaming monitor less for the desktop and, ideally, to be used within the confines of a living room.

On that note and specs-wise, the XG43UQ’s display has a maximum resolution of 4K (3840 x 2160) with a 144Hz refresh rate and 1ms Moving Picture Response Time (MPRT). Thankfully, it’s got relatively thin bezels on all four corners too. Further, it is also a monitor with DisplayHDR 1000 certification with a peak brightness of 1000 nits, and even has a 90% DCI-P3 colour gamut certification, so you’re guaranteed deeper blacks and more accurate colour reproduction.

Adding to the list of features, the XG43UQ is also an AMD FreeSync Premium Pro monitor, making it an ideal monitor for PC gamers that own an RDNA2-based graphics card or one of the latest gaming consoles. For ports, the XG43UQ has a couple of HDMI 2.1 ports, two HDMI 2.0 ports, and a Display 1.4 DSC port at the side, accompanied by a USB 3.0 Hub and an earphone jack, although I doubt people would be using this I/O often.

Oh, and the monitor does come with a mini projector that projects the ROG symbol, either on the table or up to the roof, depending on the orientation of choice. That said, it’s an external module and not an integrated feature, so some assembly is required. In my case, though, the module refused to cooperate with me and as such, I was unable to include any pictures of its aesthetic function at the publication of this article.

Is It Any Good?

For a gaming monitor, the XG43UQ certainly scratches that itch for gamers looking for a massive, bigger-than-average monitor. While the behemoth of a monitor served as my primary display for the duration of the review, one thing I found myself doing with it was binge-watching content over prolonged periods, including shows from Netflix, YouTube, and miscellaneous sources.

On the subject of gaming, the XG43UQ effortlessly handled gaming content, with colours being punchy and standing out and deep blacks, with the latter being really immersive in games that use it as its primary motif. Having said that, having a peak brightness of 1000 nits is nice but as with all my monitors, I do not necessarily find myself maxing the feature out. Throughout the review, I was simply content with the HDR brightness level set between 400 and 500 nits.

Moving on, I also like that the monitor has a high 144Hz refresh rate, although it should be made known that that refresh rate is more or less accessible via the onboard DisplayPort 1.4 DSC port. Having said that, the presence of two HDMI 2.1 ports means that you can still game above 100Hz at 4K, but specifically at a maximum rate of 120Hz. Again, the latter point is important, especially if you are a gamer that has a Sony PlayStation 5 or Xbox Series X, and wish to gain access to the 4K120Hz that the consoles are clearly more than capable at handling.

The Bad Stuff. Tell Me.

As pretty as the panel and the output of the XG43UQ is, the one thing that the plus-sized gaming monitor is not compatible with NVIDIA’s G-SYNC. In effect, it is simply an AMD Freesync Premium Pro-compliant monitor. This isn’t me saying that if you’re planning on getting the monitor, you’re going to need to switch out that NVIDIA graphics card for an AMD Radeon-based card that is capable of outputting 4K gaming, on top of the Freesync anti-tearing feature.

On a side note, the dual 10W speakers that are installed at the base of the XG43UQ do not have the most powerful audio delivery I’ve experienced to date and for that matter, I simply left the audio duties to the onboard output of my system.

Getting back to the monitor’s performance, one recurring experience I have with the XG43UQ are multiple screen bloom in different spots on the panel. They’re especially apparent when HDR is activated and you’re looking at them via a black or dark background. Having said that, I can say that there isn’t any light leaking from the edges of the monitor.

That’s another slight issue I have with the XG43UQ, or all giant monitors for that matter: because of its sheer size and the fact that I actually sit at arm’s length of it, I’m actually forced to swivel and tilt my head, be it for switching tabs, reading multiple windows across the screen. Ideally, you want to be sitting a few feet away from it but again, that’s really dependent on the size of your living space.

Should I Buy It?

At the end of the day, the ASUS ROG Swift XG43UQ is a gaming monitor that is more an indulgence than it is a practical purchase. At RM6888, it’s still undoubtedly a relatively high price to pay for a 4K gaming monitor. Having said that, it’s still a damn sight cheaper than the asking price of ASUS’ other god-tier gaming monitors, such as the ROG Swift PG32UQX that I reviewed in the middle of 2021.

Ultimately, I would go so far as to say that the XG43UQ isn’t an ideal replacement as a desktop monitor, but would better serve gamers as a home entertainment display, right in between the gaming console and dedicated HTPC, and several feet away from the living room couch.