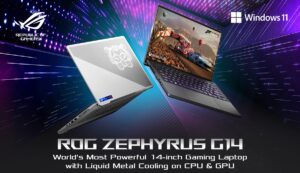 The ASUS ROG Zephyrus G14 2022 gaming laptop is officially launched in Malaysia, nearly half a year after its announcement at the beginning of the year at CES 2022. The laptop is the follow-up to last year’s G14, as well as a second refresh to the original G14 we reviewed in 2020.

As a quick primer, this year’s G14 is slightly different than the previous two iterations of the laptop, in that ASUS has decided to make the laptop an all-AMD gaming machine. In other words, ASUS is ditching NVIDIA’s GeForce RTX 30 series for mobile and switching out the discrete GPU for one of AMD’s new Radeon 6000S series.

That brings us nicely to the subject of what is under the hood of the G14. In total, ASUS is bringing in two variants of the laptop but regardless of SKU, both models will be rocking the AMD Ryzen 7 6800HS. Originally, the CPU was supposed to be a Ryzen 9 6900HS, but due to the severity of the ongoing chip shortage, ASUS told us that it had no choice but to drop the CPU tier down a notch.

Another major change to the G14 – compared to its predecessors, naturally – is the display. While the panel retains the same 14-inch form factor, ASUS has increased its screen-to-area ratio, thus giving it a 16:10 aspect ratio. Not only that, but the display’s maximum resolution is also set at QHD (2560 x 1600) and even comes with a static refresh rate of 120Hz.

Lastly, the G14 is powered by a moderately large 76WHr battery, and yes, the back of the panel sports the built in Anime Matrix LED panel.