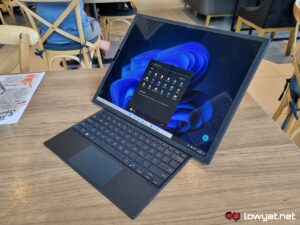 Earlier last month while sitting in for a pre-briefing with Intel, many of us were treated to a “first look” at what is officially known as the EVO Design Foldable Display. As per the official fluff, one of the main takeaway concepts to this portable machine is that it introduces a new form factor that basically allows itself to transform into a specific form factor, as a way of adapting to the user’s needs and situation, wherever and whenever that may be.

In this case, the EVO Design Foldable Display has been made manifest by the hands of one of Intel’s longest brand partners, ASUS, and to that end, as the Zenbook 17 Fold OLED. From a glance, I can tell you that it is a gorgeous looking machine but, as these things usually go, there’s actually a heck of lot more issues than the good stuff that I can nitpick about it.

Before I continue, it is important for me to point out that this Zenbook 17 Fold OLED is still in the concept phase and thus, there are some issues and features that may or may not make it into the final build of it.

Let’s start off with the basics: the specs sheet of the Zenbook 17 Fold OLED. Beneath the hood and as promised by Intel, the laptop houses a 12th generation Intel Core i7-1250U and from a quick peek at the unit’s system properties, it has 16GB of what I am guessing is low-power DDR5 and not DDR4 RAM. Continuing with the list, the laptop is powered by a 75WHr battery that, while it sounds large, actually raises the question of “Why not a larger capacity?”, an issue I will address in a little further down the line. Oh, and I should mention that this is also Wi-Fi 6e certified and does support Thunderbolt 4.

On the outside, the Zenbook 17 Fold OLED’s flexible display is actually provided by none other than Samsung. Unfolded completely into its “PC Mode”, the entire panel measures at 17.3-inches and has a 4:3 aspect ratio. Fold it at an angle and it actually starts to take on a more familiar-looking “laptop mode”, where the panel divides itself into two 12.5-inch segments, both with an aspect ratio of 3:2. For that matter, ASUS says that the laptop also comes with an ErgoSense Bluetooth-powered keyboard and touchpad, which is usually sandwiched in between the Zenbook 17 Fold OLED’s massive display when not in use and closed.

So, that’s the majority of hardware out of the way. Let’s talk about the more important aspect: the ergonomics and usability of the Zenbook 17 Fold OLED.

Despite its massive 17.3-inch panel and weighing in at just 1.6kg, the physical trait is also its own worst enemy. Fully unfolded, its size increases the difficulty of wielding one-handed; I lost count of the number times that I cursed under my breath, trying to hold it in one hand as I would with a typical tablet, only for my muscle memory to remind me that both hands are needed. Of course, the paradigm transforms entirely the very moment I switch into laptop mode for very obvious reasons.

In PC mode, the Fold OLED is a head-turner. I’m not going to lie: it is something of a refreshing feeling to be able to open the machine in all its glory, and simply prop it up on table, while simply placing the detachable ErgoSense keyboard right in front of me. Frankly, this is the closest I’m going to get to having a portable AIO or desktop prepped and ready to use, out in the public. One of the user modes I find odd, though, is the one where ASUS suggests that you use the Fold OLED in laptop mode, but with the keyboard detached and in front of the device. Personally, I don’t see why anyone would want to do that, but again, that is simply my personal opinion on the matter.

On the subject of propping the Fold OLED up, the built-in kickstand definitely feels very solid and requires some effort to pull it out from its default state. Sadly though, it is evident that it was fitted and designed to accommodate only one of the Fold OLED, and that is PC Mode.

That isn’t to say that the Fold OLED has no caveats or flaws either. One such glaring issue (no pun intended) lies with the display. I know ASUS says that it is Pantone validated and yes, colours on the display do look punchy and eye-popping. But even with the brightness levels maxed out, there are moments where I find myself squinting and, inevitably, having to shift it around in order to read what is on my screen. On an unrelated note, the laptop does also have a webcam, but when I turned it on, it’s clear that not a lot of thought had been given to it.

There’s also the topic of battery endurance and sadly, it isn’t in the favour of the Fold OLED. By the time the machine reaches my hands, it had about 25% of power left in it. Less than half an hour into my assessment of it, that charge had whittled down to 12%. This is why I inferred earlier that, considering the scope and ambition of this project, it would have made more sense for ASUS to provide a battery capacity that is larger than 75WHr.

Clearly, the ASUS Zenbook 17 Fold OLED feels like it is off to a rather unstable start, but the silver lining here is that the unit I have in my hand is still just an engineering sample and in time, we’re likely to see a more polished product. Although, when that is exactly is anybody’s guess.