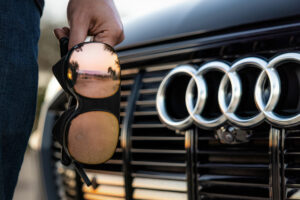 Audi has announced that its vehicles will be the first in the automotive market to support the virtual reality (VR) entertainment system by Holoride starting June 2022 onwards. With this, passengers will be able to enjoy specialised, immersive apps and games developed for the platform while riding in certain car models from the automaker.

For the uninitiated, Holoride’s VR system is a motion-synchronised experience that reacts to a car’s movement in real-time. So when the vehicle is moving, stopping or turning, supported apps and games will generate content accordingly which would feel almost infinitely unique for every trip. Furthermore, the motion felt when the car is being driven also provides the user with believable feedback, further adding the immersion. Holoride refers to this evolved on-rails VR experience as “Elastic Content.”

As you may have guessed, the system relies on sensors that are featured on a supported vehicle, which will calculate its movement and then accurately interpret them to a VR environment. Holoride also assured that the synchronisation would also reduce potential symptoms of motion sickness. Additionally, the firm noted that its system will support a variety of compatible Bluetooth-enabled VR headsets and their respective controllers, while its software is also open source – enabling third-party developers to create their own Elastic Content.

Obviously, the experience is only meant for passengers, which may come in handy for keeping them entertained during long road trips. However, both Holoride and Audi envisions the platform will play a major part once fully autonomous vehicles are introduced, opening up increased opportunities to learn and work on the road.

“When drivers also no longer have to concentrate on driving in the future, they can turn their attention to other things – work, reading, watching films, or gaming,” Audi states in its press release. “For users, the [car] interior will become their personal free space, and for designers, it will become the new design centre.”

Audi added that supported car models include the A4, A5, A6, A7, A8, Audi Q5, Q7, Q8, Audi e-tron, and Audi e-tron GT quattro1 – all of which come with the automaker’s modular infotainment toolkit (MIB 3) software. This June, the car brand will roll out the aforementioned models with Holoride compatibility to markets in Europe, Canada, the US, Japan, and China. It also noted that the availability of the system itself may deviate from this, as the startup technology will first launch in Germany, the UK and the US, with other markets to follow successively. Unfortunately, it is not known whether Audi plans to release these particular car models or the Holoride technology to other regions, including our own.

The post Audi Cars Will Be The First To Support Holoride’s VR Platform Later This Year appeared first on Lowyat.NET.