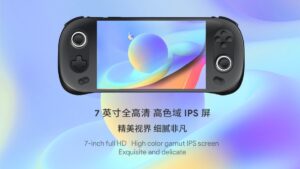 Ayaneo, the China-based company that makes handheld consoles, recently announced that its self-named Ayaneo 2 mid-range console, will launch in September this year. Additionally, the first batch of the consoles will be ready by the end of that month, with mass shipping expected to commence in the month of October.

The announcement of the Ayaneo 2 was made in the brand’s typical fashion, where both its CEO and designers reached out to its audience via a long five-hour presentation, where they provide details and updates about their range of upcoming handheld devices. While the livestream seemed to primarily focus on the Air, the brand did spare a brief moment to inform fans about the launch date for the Ayaneo 2.

For those of you wondering about the Ayaneo 2’s specifications, here’s a quick breakdown: the handheld console sports a 7-inch Full HD (1920 x 1080) IPS panel, while the layout of its controller clearly takes a page out of the Nintend Switch’s own setup. Underneath the hood, the handheld console is expected to be rocking an AMD Ryzen 7 6800U APU, which is pretty darn impressive in its own right.

As to why that is, it’s because the 6800U is a processor based on AMD’s Zen3+ architecture, and features an 8-core, 16-thread configuration. More importantly, the APU also houses 12 RDNA2 GPU cores, which is 50% more than what Valve’s Steam Deck. Although, just how much more of a performance boost that will provide the Ayaneo 2 has yet to be determined.

For another matter, the Ayaneo 2 will have the distinction of being one of the first few handheld consoles to be based on the RDNA2 graphics architecture. Oh, and the onboard OS for the console will be Windows 11.

The only thing missing from the announcement is the official pricing at launch. Once again, the Ayaneo 2 is considered by its own parent company to be a mid-range to high-end device. So, while the “Premium” Edition consoles such as the Ayaneo Next 2 could end up costing somewhere within the range of RM4400, there is a possibility that we could be looking at an average price tag between RM2000 and RM3000, hopefully.

The post Ayaneo 2 With Ryzen 7 6800U APU Launching This September appeared first on Lowyat.NET.