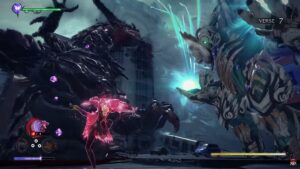 Depending on the extent of your fandom for the Bayonetta series, you’re either having a blast with your first run with the third game, or are already on repeat playthroughs. Dropped as a surprise good news is that the fourth installment, presumably one that will simply be called Bayonetta 4, is already in the works. This is according to series creator Platinum Games VP Hideki Kamiya.

The announcement was made on Twitter which, considering this is Kamiya we are talking about, needs to go through a translator. But rather than just a simple announcement, the tweet addresses the unpopular ending for Bayonetta 3, and that the fourth game “will be an unexpected development for everyone”.

While there could be debates to be had regarding if Bayonetta 4 was expected or otherwise, common consensus paints a picture that the third game did end in a weird note, possibly leaving more loose ends than it ties up. But more importantly, the game really highlighted the age of the Nintendo Switch hardware. While the characters are highly detailed and very well rendered, the same can’t be said about the levels and set pieces, which looks decidedly last-gen, at times looking like its first incarnation on the PS3.

So while the fact that Bayonetta 4 officially being in the works is a good thing, this will be flipped on its head if it ends up being another Nintendo Switch title. The series can clearly be so much more, being a spiritual successor of sorts to the Devil May Cry series before its triumphant return with Devil May Cry V. But at the same time, it is also a Nintendo exclusive series, since the second and third game are funded by the publisher. For the next game to not repeat the mistakes of the current one, it needs to be on a newer machine than the Switch.

The post Bayonetta 4 Is Already Being Made, According To Hideki Kamiya appeared first on Lowyat.NET.