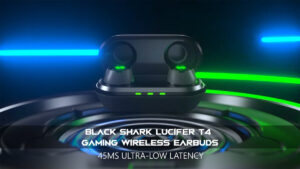 Black Shark has announced that its latest true wireless (TWS) earbuds, the Lucifer T4, is now available in Malaysia. It is touted to provide both regular users and gamers alike with high quality audio, ultra-low latency, and up to 24 hours of listening time.

The new Lucifer T4 sports a stemless TWS design with a striking black and grey two-tone colour scheme, as well as illuminated Black Shark logos on each side. Both buds are rated IPX5 in terms of weather resistance, making them ideal for outdoor and sporting use.

Alongside the earbuds is a wide charging case, which features LED battery indicators which are visible when the lid is lifted up. Different ear tip sizes are also included in the package for a more personalised fit.

Specs-wise, the earbuds are equipped with 6mm drivers that promise “powerful, deep bass and clear treble” as well as built-in microphones in each earbud for calls. Unfortunately, it does not feature any active noise cancelling (ANC) capabilities. Besides that, the buds come with Bluetooth 5.2 connectivity, and is compatible with iOS, Android and Windows devices, as well as the Nintendo Switch. There’s also the onboard Game Mode feature that allows for ultra-low latency of only 45ms, which is essential for gaming.

Black Shark claims that the Lucifer T4 is able to last up to 6 hours on a single charge, with an additional 18 hours via its included charging case. Battery top-ups are done via USB-C, but it was not specified whether the case comes with any fast charging support.

The new Black Shark Lucifer T4 TWS earbuds are offered at a recommended retail price of RM 229. Those interested may purchase them via the company’s official online stores on Lazada and Shopee starting today.