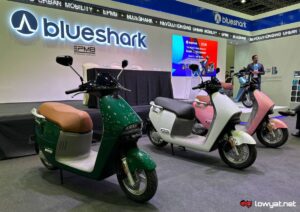 Sharkgulf Technologies Group together with its local partner, EP Manufacturing Berhad (EPMB) today officially introduced the Blueshark R1 electric motorcycle in Malaysia. Boldly claimed as the world’s most advanced smart electric scooter, its rollout into Malaysia is under the responsibility of Sharkgulf’s Malaysian subsidiary, Blueshark Ecosystem which also covers the ASEAN region.

The R1 is equipped with a 5kW motor that can deliver up to 201nm of torque alongside a top speed of 80km/h. In addition, Blueshark claimed that the scooter can accelerate from 0 to 50km/h in 4.9 seconds and users can choose to ride it in six different driving modes.

Among them is a rather curious option called Turbo Racing Mode that would utilize both of the bike’s batteries to maximise its performance. There is even a Reverse Assistance Mode which is would activate the scooter’s rear camera and ultrasonic sensors to provide more visibility for users to move the bike.

Speaking about the battery, the R1 features a dual-battery design with each of the 12kg battery packs having a capacity of 1440Wh. With both batteries onboard, the scooter can reach a distance of between 110km to 160km depending on the load and speed.

In terms of charging speed, Blueshark claimed that it takes around 2.5 hours to reach the state of charge from 0% to 80% or 3.5 hours if users want to go up to 100%. Owners can choose to charge the R1’s battery either using a battery charging cradle or directly to the bike via a 3-pin charger.

There is a huge reason why Blueshark has chosen a dual-battery design for the R1 which is to have the swappable ability for the battery. In fact, the company has noted that the R1’s battery swap technology is the first such implementation that has been approved by Road Transport Department (JPJ).

The R1 is also equipped with an IPX5 waterproof 10-inch HD IPS screen and the bike itself runs on the company’s proprietary Linux-based ArkRide operating system that also has its own navigation system and can be customised to provide bespoke notification as well as services. Being a connected vehicle, the scooter also features 4G and Bluetooth connectivity alongside media playback and over-the-air update capabilities.

Unlike traditional motorcycles, the R1 also comes with a keyless entry system and utilizes a fingerprint sensor to start the bike while owners can also check its status via a mobile app. As interesting as this electric scooter might be, it is not yet available for end consumers for the time being.

While Blueshark does plan to release the R1 to consumers sometime in the future, the scooter will be made available for the commercial segment first. Even though the CKD production by EPMB is expected to kick off in Q3 2023, the company is currently gearing up to kick off a pilot programme in Klang Valley this coming November to demonstrate the bike’s feasibility as a first-to-last mile electrified platform.

In addition to that, Blueshark and EPMB together with Malaysian Green Technology & Climate Change Corporation (MGTC) will be using the programme as one of the means to create job opportunities for the B40 communities. Advanced discussions are currently in motion with other key industry partners too in which will be announced in months to come.