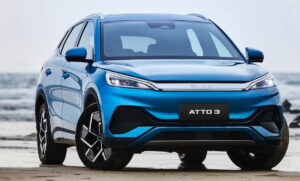 Chinese automotive company BYD Auto signed a distribution agreement with Sime Darby Motors (SDM) in late September that will enable it to enter the passenger vehicle market in Malaysia. As a result, among the first BYD models that will be making their way here is the Atto 3 all-electric subcompact crossover SUV.

Also known as the Yuan Plus in specific markets such as China, the new EV will be making its debut in Malaysia during a three-day launch event from 9 to 11 December at Bandar Malaysia which is located near the former Sungai Besi Air Base. This was revealed through a Facebook page operated by SDM’s BYD division.

Developed using e-Platform 3.0 that BYD has created from the ground up for electric vehicles, the Atto 3 offers a maximum travel range of 410 km for the Standard variant according to the NEDC standards while the Extended Range option can go further up to 480 km. In terms of battery, they are powered by the proprietary BYD Blade Battery which is made from lithium ferro-phosphate with capacities of 49.92kWh and 60.48kWh, respectively.

When it comes to charging, this 5-seater SUV is equipped with a Type 2 connector that supports AC charging of up to 7kW. For DC fast charging, it relies on the CCS2 connector and supports a charging rate of up to 80kW depending on the respective variant.

Hence, it takes up to around 9.5 hours on AC charging or 1.2 hours on DC charging to fully charge the Atto 3. However, it is unknown at the moment which of these variants will be offered by BYD and SDM in Malaysia.

Other notable features that come with the car include a motorized 12.8-inch infotainment display that can switch from landscape to portrait orientation and vice-versa, a 5-inch digital instrument panel for the driver, 8-speakers Dirac HD Sound system, multi-colour ambient lighting that follows music playback, 2.2kW Vehicle To Load output, and NFC key card.

While the official pricing for Atto 3 in Malaysia has not yet been revealed, it is currently rumoured to be between RM150k to RM170k. For those who are interested to check out the new EV directly at the launch event in Bandar Malaysia this December, just head on to this mini-site to register your details.

The post BYD Atto 3 All-Electric SUV To Debut In Malaysia This December appeared first on Lowyat.NET.