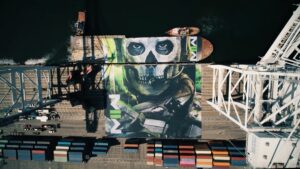 Back in April, Activision confirmed that this year’s entry into its annual shooter franchise will be called Call of Duty: Modern Warfare II. At the time, the publisher did not reveal a release date for the game with a very confusing name. But with the publishing of a very bizarre-looking trailer, we now have a release date.

The trailer itself seems to exude some sort of fetishising of cargo ships and cargo bays, probably to play into the pun of the game shipping on its release date of 28 October. Either way, using those elements, as well as a few cargo containers, the trailer reveals that characters from the previous game will be making a return. There will also be a new character going by the name of Alejandro Vargas, which is pretty similar to a minor villain back in the original Modern Warfare 2.

This new Call of Duty: Modern Warfare II trailer is also devoid of any sort of gameplay. But even with this being the case, considering it’s a sequel of a reboot, it’s probably safe to say that fans already know what to expect, with the only new element being the story.

Within the trailer there’s a short shot of J.8.22, which could imply more details to be dropped on either 8 June or July. Though it’s not clear if this will be another trailer, or some sort of developer live stream that looks to be the trendy thing to do these days. Either way, it looks like more info on the game is inbound between now and its release.

Call of Duty: Modern Warfare II will also likely be an especially long-lived entry into the series, with continuous updates an extra year. After all, next year’s entry is being pushed back to 2024, making it the first time the series has taken a break since its inception in 2005.

The post Call Of Duty: Modern Warfare II To Release On 28 October appeared first on Lowyat.NET.