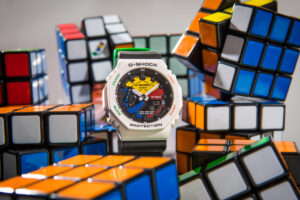 Casio’s G-Shock watches have seen numerous collaborations with renowned brands from popular culture, delivering multiple attractive limited edition watches – some with unique designs or colour schemes. Newly added to this list is the watch brand’s latest timepiece, which is also its first ever collaboration with perhaps the world’s most iconic toy: the Rubik’s Cube.

Like most of the company’s limited edition releases, the new G-Shock x Rubik’s Cube watch is based on an existing model which is decked out with the collaborative partner’s signature design elements and colours. In this case is the Casio G-Shock GA-2100 model which offers both analog and digital interfaces, as well as a minimalist but rugged body.

The Rubik’s Cube limited edition watch, also known by its name GAE-2100RC-1A, features a watchface that depicts the blue, red and yellow sides of the toy. It comes with a white shock-resistant bezel with green and orange accents, along with black straps that feature an orange buckle and green keeper. On its back is a stainless steel plate engraved with both G-Shock and Rubik’s Cube logos.

The timepiece comes with a plastic box which, naturally, is themed after the Rubik’s Cube. Also included in the package is a black replacement bezel that can be swapped with the one already equipped on the watch. It’s worth noting that the G-Shock GA-2100 series is known for its screwless bezel structure, which enables users to easily swap bezels if they so wish – meaning that you could also switch it with other official ones of varying colours that are available in the market.

The new Casio G-Shock x Rubik’s Cube is slated to arrive in Malaysia from April 2022 onwards at a recommended retail price of RM 729. The watch will be available via official G-Shock flagship stores nationwide and Casio Malaysia’s online store.