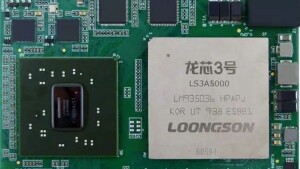 China’s government officially issued a ban on the exporting of its Loongson processors, based on its LoongArch microarchitecture, to Russia and several other countries. The Asian superpower says that while it may seem like it, the ban apparently has nothing to do with the ongoing Ukraine war.

The Loongson ban is reportedly due to the fact that, for some time now, several Russian companies have been scouring the globe for alternatives to x86 processors and Compute GPUs from US developers. As you well know, tech giants AMD, Intel, and NVIDIA all ceased operations and exports to Russia, after the country invaded the neighbouring country of Ukraine, unprovoked. Couple that with the long list of sanctions, and it’s easy to see why the Slavic nation would look for alternatives.

“Although Russian companies do not depend on the supply of Chinese processors significantly, in case of a hypothetical blocking of ‘parallel imports,’ they hoped to switch to Loongson solutions,” a source explained to the Kommersant, the Russia-based newspaper. “The best (Loongson CPUs) are used by the Chinese military-industry complex, this is the main reason why they are not available to foreign markets.”

Getting back on point, it seems that China does not want its Loongson CPUs to be considered as an alternative to its US counterparts, be it in Russia or any other country for that matter, at this moment. However, that doesn’t mean that Russian companies will be feeling the absence of the void now left by its Asian neighbour.

“For now, the decision to ban exports of Loongson CPUs to Russia will not cause much damage, as big projects to deploy Loongson in Russia most likely have not yet begun,” Maxim Koposov, chief executive of Prombit, a Russian PC maker which has tried to use non-x86 processors in its systems, said.

China’s decision over its Loongson export ban can also be seen as a self-defense reaction to its own list of sanctions against it, by the US government. To that end, it has begun the procedures with the World Trade Organisation (WTO) in the hopes that it get the world body to oppose the ban, although it seems like a fruitless endeavour at this point.