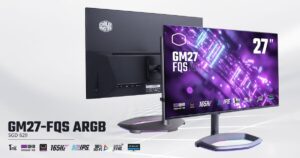 Starting with the GM27-FQS, this gaming monitor features a panel measuring 27-inches with a maximum display resolution of 1440p (2560 x 1440) and maximum refresh rate of 165Hz and 1ms GTG response time. Further, it has a DCI-P3 colour accuracy of 90%.

Additionally, the Cooler Master GM27-FQS has a peak brightness of just 300 nits and also supports AMD FreeSync Premium, which in turn means that it will pair nicely with any Radeon graphics card that supports the feature. Ports-wise, the monitor comprises one DisplayPort port, two HDMI 2.0 ports, two USB-A ports, one USB-C port, and a 3.5mm headphone jack.

Lastly, the Cooler Master GM27-FQS is also an ARGB gaming monitor and as such, has been fitted with LEDs that are capable of dazzling consumers with all 16.8 million colour, all controllable via the Cooler Master own MasterPlus+ app.

The Cooler Master GM27-FQS is already available and retails for RM1799.

Next on the list is the bigger, and slightly more premium GM32-FQ. Now, despite its name, the gaming monitor’s panel actually measures in at 31.5-inches. Much like its 27-inch counterpart, it is an IPS panel with a maximum resolution of 1440p (2560 x 1440), a refresh rate of 165Hz, along with a 1ms GTG response time.

Moving down the list, the GM32-FQ also supports AMD’s FreeSync Premium anti-screen tearing technology, but is also an Adaptive Sync monitor, meaning that it can effectively be paired with either an AMD Radeon or NVIDIA GeForce GPU, and you’ll be able to take full advantage of its built-in Game Mode, as well as access to the ultra high refresh rate, for seamless, higher than average framerates and refresh rates. Oh, and the panel also features a Low Blue Light Display Mode that, as its name suggests, helps to cut down on the intensity of harmful blue light emitted from our displays.

Again, just like the 27-inch model, the GM32-FQ is an ARGB monitor with RGB LEDs all built into its base and produces all 16.8 million colours on the spectrum. Ports-wise, it has the identical number of ports as its smaller brethren, sans the 3.5mm headphone jack.

The Cooler Master GM32-FQ is already available and retails for RM2199.