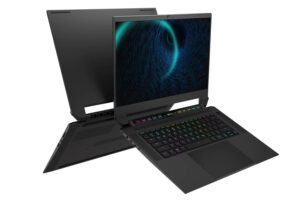 During its keynote yesterday, AMD had a couple of announcements besides the new Ryzen 7000 Series desktop CPUs. One particular announcement actually happens to be an all-AMD gaming laptop from, of all brands, Corsair.

It’s officially called the Corsair Voyager, and more to the point, it is also an AMD Advantage Edition laptop, meaning that the laptop sports all-AMD components, at least where it counts. Specs-wise, the laptop comes in two CPU configurations: either with a Ryzen 7 6800HS or Ryzen 9 6900HS CPU, both of which have 8-cores, 16-threads. The discrete GPU within the laptop is a Radeon RX 6800M, while the main display is a 16-inch QHD+ (2560 x 1600) with a 240Hz refresh rate and 16:10 aspect ratio. On that note, the Voyager also comes with an integrated MUX Switch.

How much memory the Voyager has, depends on the CPU configuration. For the model with the 6800HS, users get 32GB (16GBx2) of dual-channel Corsair Vengeance DDR5 SO-DIMM memory, while the model with the 6900HS has double the amount of memory at 64GB (32GBx2). Storage-wise, we’re looking at up to 2TB of PCIe Gen4 storage, via M.2 SSD.

The highlight of the Voyager, however, is that it is also built to be a content creator’s or livestreamer’s best friend. To that end, the laptop also features a touchbar at the top of the laptop, complete with 10 easy-access S-Key, fully customisable and powered by Corsair’s Elgato Stream Deck software. Further complementing the streaming suite is a Full HD webcam capable of streaming at 1080p30 resolution, built at the top of the laptop’s display, along with directional 4-microphone array with ambient noise cancellation.

As you’d expect, even the keyboard on the Voyager is mechanical, based on Corsair’s Cherry MX ultra-low profile keyswitches, and illuminated with per-key RGB LEDs. For ports, we’re looking at two Thunderbolt 3 USB 4.0 ports, 1 USB-C 3.2 Gen2, one USB-A 3.2 Gen1, an SDXC 7.0 card reader, and a 3.5mm audio combo jack. Wireless connectivity on this laptop includes Wi-Fi 6E support and Bluetooth 5.2, while powering the entire machine is a 99WHr battery. Oh, and it weighs in at 2.4kg.

The post Corsair’s First Ever Gaming Laptop Is An All-AMD Machine appeared first on Lowyat.NET.