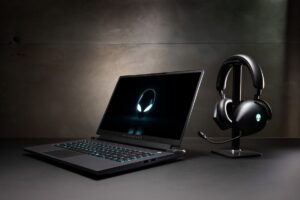 Dell officially launched the new M17 R5 gaming laptop, which also happens to be the brand’s latest AMD Advantage Edition Laptop, in part of its ongoing collaboration with the CPU and GPU brand to provide the world with all-AMD laptops.

Getting into the hardware specifications, The M17 R5 is clearly equipped with a Ryzen 6000 series CPU, as well as a Radeon 6000 series mobile discrete GPU. While Dell did not specify which CPU the laptop is fitted with exactly, it did, however, state that the mobile GPU will be a Radeon RX 6850M XT with 12GB of GDDR6 graphics memory.

To our surprise, Dell doesn’t actually provide us with a baseline model, so we don’t exactly know how much RAM the new M17 R5 is shipping out with, let alone the storage capacity. Having said that and based on the previous model, it is likely that the company will be bringing a model with either a Ryzen 7 6800HS or Ryzen 9 6900HX CPU, with up to 64GB DDR5 RAM, and perhaps up to 4TB worth of NVMe Gen4 storage.

Perhaps one of the physical features that stands out from the new M17 R5, though, is its new 17.3-inch display. Then, as now, the display is still a Full HD panel but this year, the panel now has a maximum refresh rate of 480Hz and a 3ms response time. Also, in order to accommodate the Radeon GPU, the display will also support AMD’s FreeSync anti-screen tearing technology.

On a side note, Dell also says that the 480Hz panel is also available for its x17 R2 gaming laptop, but because the model is fitted with an NVIDIA GeForce RTX 30 Series Mobile graphics, the screen will be tweaked to support the GPU brand’s G-SYNC technology with Advanced Optimus.

Getting back to the M17 R5: as it is an AMD Advantage laptop, the laptop also comes with all bells and whistles that are warranted to such laptops. This includes Smart Shift Max, SmartAccess Graphics, Smart Access Memory (SAM), and support for FreeSync Premium.

At the time of writing and oddly enough, Dell Malaysia did not specify local availability or pricing. We’ve reached out to the brand’s representative for said information.