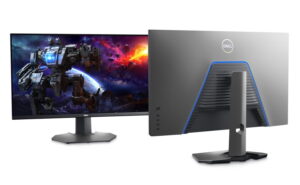 Dell has just unveiled two new 32-inch gaming monitors which are now available for purchase in select markets including Malaysia. Both monitors which are designated as the G3223D and G3223Q look identical to each other when it comes to physical design but not their display panel.

Even though both are equipped with Fast IPS panel alongside a refresh rate of 165Hz for PC or 120Hz when used with gaming consoles, the G3223D which is officially called the Dell 32 USB-C Gaming Monitor has a native resolution of 2560 x 1440 (QHD).

On the other hand, the G3223Q or the Dell 32 4K UHD Gaming Monitor has a much higher resolution panel as you can tell from its official name. They also conform to different levels of DisplayHDR standard at 400 and 600, respectively.

When it comes to pricing, the G3223D can be obtained for RM2,259 while the G3223Q is listed at RM3,539. As always, you can check out Dell Malaysia’s official website to learn more about both gaming monitors.