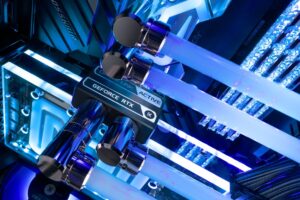 EK, the PC component brand renowned for its waterblocks and liquid cooling solutions, officially pulled the veil back from its latest offering to the PC building market: a vertical bracket for graphics cards. More specifically, the new bracket is a “shifted version” of the EK-Loop Vertical GPU Holder EVO for PCIe 4.0 GPUs.

As per its official press release, the vertical bracket is designed and intended for PC casings with horizontal bars between PCIe expansion slots. EK also says that this is the most secure and rigid vertical GPU bracket it has made, and that it was made possible by using two ATX motherboard mounting points, allowing for the secure fastening and installation of graphics cards.

“Displaying your water-cooled graphics card or, alternatively, a GPU with a standard massive air cooler has become increasingly popular over the years. One way to do this is to use the special aftermarket brackets that mount the GPU vertically if the case is not already equipped with vertical PCIe slots,” EK explains. “However, the user often faces issues with how these solutions work since they don’t offer enough support, allowing the GPU to move around, sag, and stay crooked. This can significantly impair the aesthetics of said PC, which is a major problem as improving the looks is the main purpose of this bracket.”

Once again, and just to be clear, the riser provided with EK’s vertical bracket supports PCIe 4.0, and not one that only supports the previous generation PCIe 3.0 interface. EK claims that it has rigorously tested its riser with both AMD’s Radeon RX 6000 series GPUs, as well as all the cards released by NVIDIA under its GeForce RTX 30 Series GPU. And while we do not think it is necessary to mention this: yes, the PCIe 4.0 riser is compatible with older PCIe 3.0 graphics card too.

The EK-Loop Vertical GPU Holder EVO-Gen Riser (Shifted) retails for €135.90 (~RM627) and will be available in the European market first via the brand’s online store and partners in the region. At the time of writing, the company did not specify local availability.