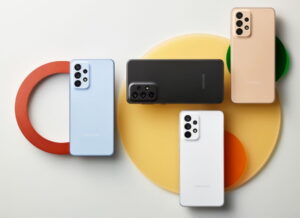 Exploring the world isn’t complete without recording it on your phone. In this day and age, capturing your adventures and posting them on social media has become a staple of modern-day vacations.

Whether it be exploring the deep blue sea or taking a snapshot of the view on top of Mount Fuji, you need a phone you can bring along with you no matter the adventure. And with the new Samsung Galaxy A Series, consisting of the Galaxy A33 5G, Galaxy A53 5G, and Galaxy A73 5G, that’s exactly what you get.

So, here’s everything you need to know about the 2022’s Samsung Galaxy A series before you embark on your next adventure.

Nobody wants to risk dropping their phone and possibly breaking it when they’re out having fun. With a screen protected by Gorilla Glass 5, the Samsung Galaxy A Series is made to withstand unexpected drops. These phones are built to tough out scratches, allowing for unadulterated adventure without a care in the world.

Designed to meet the IP67 standards, you can expect your Samsung Galaxy A33 5G, A53 5G and A73 5G to be protected against dust as well as water spills and splashes. Tests have also shown that the Samsung Galaxy A Series can be submerged in up to 1 meter of freshwater for up to 30 minutes. This means you won’t need to worry about keeping your phone in a Ziplock bag filled with rice when you accidentally drop it in the water!

Of course, capturing videos and photos of your holidays is the most important part of recording your adventures. With Optical Image Stabilization (OIS) system on the main camera, the Samsung Galaxy A Series is more than capable of delivering clear photos and videos.

Additionally, their Night Mode feature ensures that brighter, clearer photos are taken no matter the lighting conditions. Thanks to the powerful processors that Samsung has equipped into all three devices within the Galaxy A Series family, you could also utilise the AI-powered Scene Optimizer that allows their cameras to recognise what’s in your photo and adjust the settings accordingly!

Not only that, but the Galaxy A Series also comes with expandable storage so that you can keep all your holiday photos in one convenient place! With the option of expanding it with a microSD card up to 1TB, you can have up to 256GB of internal storage as standard on the new Galaxy A Series phones.

And, you won’t have to worry about battery life either! Keeping your devices all juiced up while you’re out and about can definitely be a chore. With the 5000mAh battery on each of these new Samsung Galaxy A Series devices, you can enjoy close to two days of battery power on a single charge, depending on your usage patterns.

Oh, do you know that Samsung Galaxy A33 5G, A53 5G and A73 5G come with a feature called RAM Plus? This particular feature allows all three devices to obtain an additional amount of memory from their internal storage to help boost their performance further!

Through RAM Plus, Samsung Galaxy A33 5G, A53 5G and A73 5G can activate 8GB of virtual RAM on top of their existing 8GB RAM. With a total memory of 16GB, this allows for enhanced multitasking by running multiple apps smoother and faster, even when you’re gaming, editing videos or streaming!

Not only that, the Samsung Galaxy A73 5G comes with a combination of heat pipe and vapour chamber that disperses heat throughout the phone. Thus, allowing for an effective cool down no matter how heavy or how many apps you run on it.

This means nonstop adventure and a phone that can keep up just fine. So, the next time you’re out searching for adventure, pick up an awesome Samsung Galaxy A device to really capture everything with ease.

You can now get 20% OFF on Samsung Care+ Accidental & Liquid Breakage or Breakdown Plan for up to two years when you purchase a phone from the new Samsung Galaxy A Series from now until 31st July 2022. Not only that, but you will also be able to enjoy great savings when you trade in your eligible device, along with an additional rebate of up to RM150 added to the base trade-in value!

Find out more about Samsung’s best-selling midrange series here, or check out their e-store now!

This article is brought to you by Samsung.

The post Embark On AWESOME Adventures With Samsung Galaxy A Series 5G appeared first on Lowyat.NET.