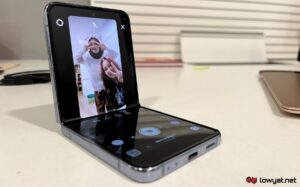 Samsung recently unveiled several new additions to its Galaxy family at the Unpacked launch event including the Galaxy Z Flip4 which is now available for purchase in Malaysia. During the announcement, the company highlighted its unique FlexCam feature – one of the many functionalities contained within the new foldable device.

However, you might be wondering – what is this function and how exactly does it work? Well, continue reading to find out everything you need to know about the Galaxy Z Flip4’s handy camera feature.

The FlexCam is a feature that allows users to take pictures and films while remaining hands-free. By utilising the Galaxy Z Flip4’s highly durable and posable hinge construction, this function enables users to prop up the camera on various surfaces and take selfies as well as group shots without having to seek the help of others.

“It’s like having a camera and tripod all in one”, as said by Samsung’s Dillon Hesse during Samsung’s August 2022 Unpacked event. As the phone itself can act as your tripod, the FlexCam essentially provides a completely new perspective to your photography.

Samsung mentioned the camera feature in its press release as well:

Designed with the young creator in mind, Galaxy Z Flip4 wants its users to have limitless opportunities to express themselves from every angle. With FlexCam, users can capture photos and videos from different points of view, with bolder angles than ever before. Shoot hands-free video or capture full group selfies at various angles by partially folding Galaxy Z Flip4 to activate FlexCam.

Speaking of “the young creator,” the FlexCam is not just a component of the Camera app.

In addition to being integrated into some of Samsung’s own apps, third-party app developers have also declared support for it including one of the biggest companies in the world, Meta. As per its announcement, FlexCam will enable users to create Stories and Reels hands-free on Facebook and Instagram as well as video calls on Messenger and WhatsApp.

For those who are in tune with the Samsung Galaxy family, we reckon that this is not the first time you have seen the word “Flex” when it comes to a Galaxy Z device. Does the Galaxy Z Flip3’s Flex Mode ring a bell?

“Thanks to Flex mode on Galaxy Z Flip, you can use your phone hands-free by standing it up on a surface. Take selfies at whole new angles, make video calls, or capture long-exposure images without the use of a tripod easily by folding the Galaxy Z Flip”, said Samsung, while discussing Flex Mode at the time and essentially describing the FlexCam on the new Galaxy Z Flip4 as well.

This time, though, Samsung has additionally added software-based improvements to Flex Mode on the Galaxy Z Flip4. Currently, you can hold the phone like a camcorder to record videos and use the lower section of the screen as a touchpad to navigate through videos. Nice, huh?

If you are interested in experiencing the FlexCam function on the new Galaxy Z Flip4 yourself (because we sure had a lot of fun with it) together with plenty of other powerful features within it, you are now able to get your hands on it with a starting price of RM4,099.

Being an early adopter, you will be provided with a free Galaxy Watch4 Bluetooth 40mm worth RM799 alongside your new Galaxy Z Flip4! Not only that, your new foldable will also be protected by an additional 1-year Samsung Care+ extended warranty which includes up to three times of protective film replacements.

If you are a fan of the Galaxy Z Flip4 Bespoke Edition, fret not, you are still able to get to enjoy all the freebies we have mentioned above. On top of all that, you will also receive a free Clear Slim Cover worth RM99 and 2% Samsung Rewards Points.

That’s not all though: all new Galaxy Z Flip4 owners have the chance to win themselves The Freestyle ultra-versatile projector worth RM4,999. With 80 units to be given away weekly until 2 October 2022, you could be the lucky one!

In case you want to take a closer look at the Galaxy Z Flip4 first before making your move, you can head on to the nearest Samsung Experience Stores and authorised Samsung dealers. However, we do recommend you have a little bit more fun while checking out Samsung’s new foldable by visiting the penultimate Samsung Galaxy Flextival Roadshow stop at Sunway Pyramid on 29 September to 2 October.

Not only that you are able to experience the new Galaxy Z Flip4 to your heart’s content complete with Samsung product experts on the side ready to answer any of your questions regarding the device, you will also receive a special gift pack worth RM250 if you decide to purchase the device there.

This is on top of all the freebies that we mentioned earlier. However, the Galaxy Flextival Roadshow gift pack is exclusive for the tour – that’s a bonus right there.

Furthermore, you can also meet influencers such as Jinny Boy, Alex Ho, Yaya Zahir, JE Pong, and Rafidah Ghazali on 29 September at the event. It should be the perfect time not only to capture some memories with them but also to seek tips on how to best utilize the new Galaxy Z Flip4 to spice up your social media.

As always, be sure to visit Samsung Malaysia’s official website if you want to learn more about the all-new Galaxy Z Flip4.

This article is brought to you by Samsung.

The post Everything You Need To Know About Samsung Galaxy Z Flip4 FlexCam appeared first on Lowyat.NET.