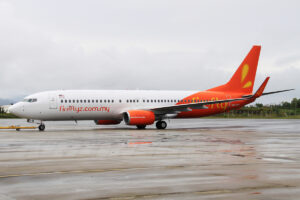 Firefly has announced that it will resume jet airliner flights from its hub in Penang starting 11 April, taking over operations from sister company Malaysia Airlines (MAS). The move will see the local carrier connect the island with Johor Bahru, Kuching, and Kota Kinabalu.

The resumption of its jet-based operations comes a year after the service’s suspension in 2021. This was due to the prolonged Movement Control Order (MCO) implementation to curb further spread of COVID-19 in Malaysia, which resulted in low demand for flights. Even after the easing of domestic travel restrictions, flight operations from Penang to the aforementioned locations have been handled by MAS, as mentioned earlier.

During yesterday’s media event, CEO Philip See revealed that Firefly will rely on its Boeing 737-800 aircrafts for the routes, and will offer fares as low as RM69 for one-way flights. Customers will have the flexibility and convenience of seat, insurance coverage, and in-flight food selection.

Flight tickets are now available for bookings via the Firefly application and website, as well as booking offices and travel agents. Additionally, it is revealed that customers may also make their reservations via Malaysia Airlines’ website through code-share arrangement.

The post Firefly To Resume Jet Airliner Operations From Penang; Offers Fares As Low As RM69 appeared first on Lowyat.NET.