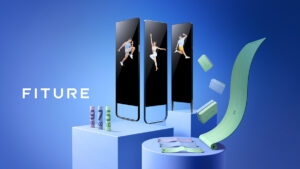 China-based fitness technology company Fiture has officially launched two of its interactive mirrors for the Malaysian market. Consisting of the flagship Core model and the smaller Mini, these products feature a smart mirror display, built-in motion tracking sensor, internet connectivity via phone tethering, and are powered by AI technology.

First off, the Fiture Core Fitness Mirror measures in at 68 inches in height, 23 inches in width, 1.6 inches in thickness, and weighs in at around 27 kilograms. Housed within its tempered glass protected mirror is a 43-inch colour display, along with a barely visible Motion Engine tracker situated beneath it. Found on the left and rear of the mirror are its stereo speakers, while on its right hand side are the volume controls. This particular model is offered in Night, Oasis, Ocean, Stardust, and Sunlight colour options.

As you’d expect, the Fiture Mini Fitness Mirror model is basically a smaller version of its flagship sibling. Specifically, it measures at 63 x 20 x 1.6 inches and weighs in at around 18 kilograms. The mirror also comes with a smaller 32-inch colour display, while the rest of its hardware is the same as the Core model. There’s not much choice in colour as Night is the only option available for the Mini.

While both variants may look like gigantic touchscreen displays, they do not come with such a function. Instead, both the Core and Mini rely on gesture-based controls – similar to the Kinect system for Microsoft’s Xbox video game consoles. Fiture recommends users to be 1.5 metres away in order for the Motion Engine system to register their movements properly.

The gesture controls themselves are pretty straightforward; hold up your right hand to confirm, your left hand to go back to the previous menu, while swiping your hand left or right will scroll through any selections that are shown on-screen. Unfortunately, the duo does not feature any voice activated controls.

Both the Core and Mini come with several built-in workout and challenge modes, video-based coaching classes with real time form feedback, as well as some mini-games for entertainment. All of these require the fitness mirrors to be connected wirelessly to the Fiture mobile app for phones, which provides the ability for users to control the devices remotely as well as download new content whenever available. Unfortunately, you cannot use either model when offline or without them connected to the app.

It’s also worth noting that both models rely on smartphone tethering in order to connect to the internet. On that note, online services include a global scoring and ranking system which pits the user against others from around the world. As far as privacy is concerned, Fiture assured that crucial data (scores notwithstanding) are only stored on the user’s mobile device, while the onboard motion tracker cannot function as a camera.

We should also point out that the Core and Mini fitness mirrors are subscription based, which costs RM 129 a month. Fiture says benefits include access to its online services, as well as content such as new workout, challenges and coaching modes on a weekly to monthly basis.  However, keep in mind that cancelling will strip you away from using all of its services, including the Core or Mini themselves – leaving them to be just regular but very expensive mirrors. Honestly, the inability to allow users to at least use the pre-installed features when their subscription expires feels like a major deal breaker, if you ask us.

But if you’re fine with all that, both the Core and Mini fitness mirrors are available now for RM 6,999 and RM 3,999 respectively via the official Fiture Malaysia online store on Shopee and Lazada. In conjunction with the local debut, the brand is offering both products at a special promotional price of RM 5,999 and RM 2,999 respectively until 19 October 2022, along with a complimentary three months subscription. Additionally, a free installation service is also provided to customers upon delivery.