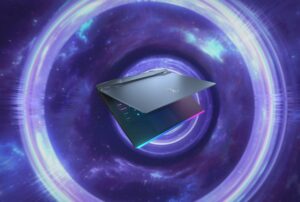 While the world of PC gamers still scurry about, in search of components to assemble their dream PC, there are those among them who have no qualms about sinking their teeth into the less tedious alternative: gaming laptops. However, as we have said many a times in the past, these powerful, portable gaming machines are pretty much a dime a dozen.

In light of that, one of the best gaming laptops you could probably get for yourself right now is the MSI GE66 Stealth, and here are a few reasons.

Powered By Intel, Driven By NVIDIA

In keeping with tradition, the most current version of the GE66 Stealth boasts an Intel 11th generation Core i9 mobile CPU, while its GPU is anything between an NVIDIA GeForce RTX 3060 and an RTX 3080 laptop GPU. We know what you’re thinking and saying about the choice of CPU, but before you say never, remember: it is still a very beefy processor and unlike its predecessor, it still comes with all the fixtures and fittings that you’d want in a laptop.That includes access to PCIe 4.0 speeds, Thunderbolt 4, and up to 64GB of DDR4-3200MHz RAM. Oh, there’s even a full-sized SD Card reader at the side. Then, to top it all off, a massive 99.9WHr battery, which is just shy of the legal flight limit for laptop batteries, but more importantly, it’s a promise of longer-than-average battery life on the go.

Did we also mention that there’s a massive, customisable RGB LED strip right at the edge of the base? Well, now you know.

In this day and age, it’s pointless to have all that power but not the ability to stream it. Well, you’ll be glad to know that the GE66 Raider is one of the first gaming laptops in the world to support Wi-Fi 6E. This guarantees that, so long as your internet connection remains fast, this laptop will always maintain the highest possible speeds available.

A Display That Is Actually Kinder To Your Eyes

Of course, no modern gaming laptop is complete without a good gaming display and to that end, the GE66 Raider does not disappoint. For the GE66 Raider, it’s hard to do better than a 4K OLED IPS display that’s VESA certified for DisplayHDR True Black 500. With a peak brightness of 500 nits, a DCI-P3 rating of 100%, and 6.5% lower blue light levels, the panel is perfect for professional creators and digital designers in need of a laptop with and ultra-high resolution and high colour accuracy.

For gamers, fret not for MSI has got you covered as well. Depending on your taste, the GE66 Raider is also available with other display resolution options, ranging from Full HD with a 300Hz display, right up to a WQHD panel with a maximum refresh rate of 240Hz.

Hear The Boom Or Indulge In Hi-Res Audio

Whether you’re gearing up for an immersive gaming experience or you’re getting ready to wind down with some of your favourite music on the laptop, rest assured: The GE66 Raider has got you covered.

As with all MSI gaming laptops, the GE66 Raider comes furnished with Nahimic audio software, as well as Hi-Res audio support. The former enables you to “elevate” your audio experience with features like virtual and 3D surround, as well as Sound Sharing with another person via Bluetooth.

For the audiophile among you, the GE66 Raider’s support for Hi-Res Audio means that you can listen to your high quality, high bitrate audio files with no compromises, and just as the experts intended.

Your Laptop, Your Rules

One of the benefits that come with an MSI gaming laptop is the feeling of total control that you get over it via a suite of programs and app organisers that are pre-installed. The GE66 Raider is no different.

Customise the laptop’s appearance and functions through the MSI Centre. Don’t like the skin of the app? Change it through UI Skin option. Want to extend your battery life even further? The Battery Master’s got you covered. Need a second display, but all you’ve got is a tablet? Not a problem with the Duet Display function.

So, if any of those key points got you interested in the MSI GE66 Raider, you can head on over to the brand’s official product page for more information. If you wish to purchase a unit online, you can do via the official merchant stores at Lazada or Shopee.

As luck would have it, MSI is also having a Chinese New Year Promotion for its laptops, as a way to start off the year. From 1 January until 31 January, you can enjoy up to RM2700 off selected laptops bundles and receive free bundle gifts, while stocks are available.

This article is sponsored by MSI.

The post Five Reasons Why The MSI GE66 Raider Is The Ideal Gaming Laptop For You appeared first on Lowyat.NET.