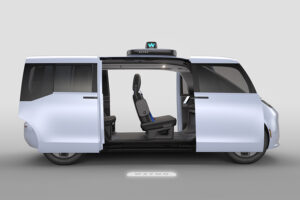 Chinese carmaker Geely has announced a collaboration with autonomous vehicle company Waymo to produce custom self-driving, all-electric cars for the latter’s US robotaxi fleet. The vehicle will be a modified version of Geely’s recently launched Zeekr 001 five-door electric car.

The custom Zeekr will be designed in Sweden (the home country of Geely-owned Volvo) and will be integrated with the Waymo Driver autonomous driving system. It will also have flat, low floors for easier accessibility and B-pillarless design together with sliding doors, fully adjustable reclining seats, outlets for passengers to charge their devices and a tablet for navigation in lieu of a steering wheel.

Of course, there will be no pedals as well since it is a fully autonomous car. However, the images released by Waymo so far are just conceptual arts though and the company has noted that the finished product might look different depending on the standards at the time of manufacturing. While Waymo said that the Geely car will be added to its Waymo One service in the US “in the years to come”, no exact timeline has been released by the company.

Geely, which owns almost half of Proton, released the Zeekr 001 in China in October and plans to launch the vehicle in Europe in 2022. Interestingly, while the collaboration calls the custom vehicle a version of the Zeekr, the concept renders look something akin to a minivan, which bears almost no resemblance to the original car with a shooting brake body style.