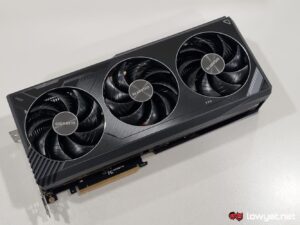 NVIDIA’s GeForce RTX 3090 Ti currently sits on the pedestal as the GPU maker’s most powerful GPU to date, at least until its next-generation Ada Lovelace officially comes on to the scene. But lest I get ahead of myself, the focus in this review is the RTX 3090 Ti and without a Founders Edition variant available, what we have in our a lab is a 3rd party, custom cooled version of the card, courtesy of Gigabyte.

As it is with all our reviews, the questions we’re seeking answers are standard: what sort of performance will an RTX 3090 Ti give, and what sort of gains are we looking at over an RTX 3090.

On paper, the RTX 3090 Ti looks nearly identical to the original RTX 3090 but, naturally, the card has been given some rather obvious tweaks and tunings that are part and parcel with every AIB partner card. It’s got two additional SM Cores than the RTX 3090, 256 more CUDA cores, a full 1TB/s bandwidth, and an increased memory frequency of 21Gbps, up from the original 19.5Gbps.

For that matter, the RTX 3090 Ti also draws 400W of power off the wall, which is 50W more than the RTX 3090. It’s a sign of things to come, given the rumours about how the enthusiast-level Ada Lovelace cards are expected to draw 600W as the bare minimum.

While the cooler shroud design of Gigabyte’s Gaming series is as straightforward as they come, the one for its RTX 3090 Ti seems to be taking fashion advice from its Vision lineup, albeit in a black shroud. Compared to previous iterations of the design, this one looks more clean-cut and streamlined. Honestly, it’s not a wild or aggressive looking and personally, it’s a simple yet elegant touch towards accenting the card’s prowess.

As a top-tier card, it goes without saying that this RTX 3090 Ti also gets the Windforce treatment. More specifically, it sports the Windforce 3X cooling system, comprising the triple 100mm fans, sitting on top of a series of heatsinks, comprising a vapour chamber, eight composite copper heat pipes, and spinning in alternate directions. All in order to maximise heat dissipations.

For that matter, the double ball bearings in each of the three fans are made to endure higher heat levels, while also sporting a more durable efficiency, compared to most other fans.

Moreover, you will notice that the massive heatsink is also longer than the RTX 3090 Ti’s PCB; there is a cutout located at the tail-end of the card where the backplate draws an outline of the PCB’s shape. On that note, it’s not the usual rectangle-shaped PCB but rather, it is clear that Gigabyte is using the same board design as the ones used with NVIDIA’s Founders Edition cards.

At this stage, this “Dual Axis Flowthrough” mimicry isn’t what I would call groundbreaking, but at the end of the day, it is clearly an effective form of cooling that, as you will see in the benchmarks, helps in getting rid of the excess heat from the RTX 3090 Ti.

Another thing to note about the RTX 3090 Ti as a whole, and not just this variant, is that it needs a new 16-pin MicroFit Molex PCIe connector to be powered. The good news is that Gigabyte provides an adapter with each model of the card, but that does require three 8-pin PCIe power connectors. Yes, I know: it is a massive, power-hungry card.

As a point of fairness, I am testing the RTX 3090 Ti through my defacto AMD Ryzen 9 5950X testbed, and not Intel’s latest 12th Generation Alder Lake series. This is because all graphics cards that entered our lab prior were all tested on the same system, and I see no reason to switch over to Team Blue anytime soon. For comparison’s sake, I will be benching the RTX 3090 Ti against the RTX 3090 FE, RTX 3080 Ti FE, and AMD’s own Radeon RX 6800XT.

Also, I am testing the RTX 3090 Ti right out of the box, without any overclocking conducted.

It comes as no surprise that, in the synthetic benchmark portion of the test, the RTX 3090 Ti pulls ahead of the other cards. In 3DMark, it’s even pulling ahead of the 6800XT, albeit by a slightly smaller margin than the other NVIDIA GPUs in the list.

In Unigine Superposition, the RTX 3090 Ti isn’t pulling any punches and clearly dominates the test across all three resolutions.

Interestingly, the story of the RTX 3090 Ti changes a little when it comes to real-world gaming performance. Just so that we’re clear, the card still pulls ahead in most games but that is also dependent on the resolution I’m running, and it’s not in the order that you think. At 4K, the card has no problem maintaining its lead. At 1440p and Full HD, it actually churns out fewer frames in certain titles than the other cards. This is evident in titles such as Deus Ex: Mankind Divided and Doom Eternal.

That isn’t to say that the RTX 3090 Ti isn’t performing. Far from it, the other titles, including the ones that RTX and DLSS ready, prove that the card is, beyond a shadow of a doubt, a powerhouse in its own right.

As far as temperature control is concerned, Gigabyte’s Windforce cooling solution is actually quite impressive. In a room with an ambient temperature of 20°C, the RTX 3090 Ti actually operated cooler than the RTX 3090 FE at load. While idle and not entirely being pushed to the limit, its operating temperature mingled between 35°C and 39°C.

As for the power consumption, the card actually consumes 50W more power than its advertised TDP of 350W. Again, this isn’t surprising and more to the point, this is a slightly souped version of NVIDIA’s current king-of-the-hill GPU, so that power consumption is still within an acceptable parameter.

It is an obvious statement when I say that NVIDIA’s GeForce RTX 3090 Ti is the current bad boy and top-performer in the GPU realm, and Gigabyte’s tweaking to the card clearly ramped up its performance to some minor extent. From an external and aesthetic perspective, the Gigabyte’s choice of design for its shroud is slightly refreshing but it’s also a sign that the brand is playing it just a little safe.

The only major drawback here is, unsurprisingly, the asking price for the RTX 3090 Ti. On average, it currently retails around RM10000, meaning that this card is technically only reachable to a select handful of individuals: chiefly, those with deep pockets and above-average disposable income.

In any case, if you’ve got the cash to splurge and you’re looking to trade up from an older, lower-tier card, or if you’re just wanting to taste of what peak power really is, then you really can’t go wrong with this card.