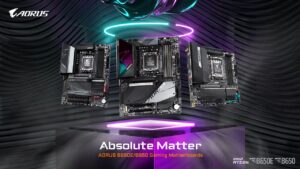 Gigabyte officially launched its B650 motherboard lineup, designed to be paired with AMD’s latest Ryzen 7000 Series CPUs. As we mentioned in our article for ASUS’ own offerings, this lineup serves as the mid-range motherboard series and serves as the “affordable” options for gamers not looking to put too big a dent on their wallets.

Once again and as a quick primer, AMD’s high-end and premium-tier X670 Series motherboards, the B650 Series comes in two variations: an Extreme variant known as B650E, and a non-Extreme version. Despite being a step below the X670 Series in terms of rank, AMD has ensured that all motherboards under the series will receive all the trimmings that are part and parcel of the AM5 chipset. This includes access to up to 24 PCIe 5.0 lanes, Superspeed USB 10Gbps and 20Gbps, and of course, the adoption of DDR5 as a standard across the new platform. These standards apply to Gigabyte and all its boards and yes: overclocking is and will be both possible and available on them.

As for brand-specific features in Gigabyte’s B650 motherboards, the brand offers its PCBs things such as Advanced Thermal Designs that comprise MOSFET heatsinks, and a Twin 14+2+1 Digital VRM Design for some motherboards, while others get 12+2+1. You also get the usual fare of M.2 SSD slots, supporting both PCIe 4.0 and PCIe 5.0 standards, but again, this is expected to become the standard with other motherboard brands, so it’s technically that big of a deal.