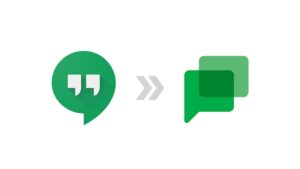 Google announced that it is shutting down Hangouts users and migrating the app to Chat, once the app will no longer be available in November this year. For those using Hangouts on mobile, there are two replacements that you may use currently; the standalone app or the Chat experience in Gmail, as initially announced in October two years ago.

The search engine reasons that migrating Hangouts to Chat opens up “new and better ways” to connect and collaborate with other communities, such as editing Docs, Sheets, or Slides while maintaining interactions. Having said that, it won’t prompt Hangout users on Gmail to switch to Chat until July, while those who use Hangouts on browsers will be asked to move to the web version of Chat.

One benefit of Chat includes Spaces, which was originally called Rooms. It is a platform for topic-based collaboration where groups and teams may collaborate on documents, share ideas, and manage files and tasks all from a single location. Furthermore, the new Gmail integrated view makes it easier to use Chat alongside your Gmail inbox, Spaces, and Meet.

While it encourages everyone to use Chat, Hangouts Web will remain available until November. Users will receive an in-product notification for at least a month before Hangouts on the web begins diverting to Chat on the web, and, for those who wish to keep a copy of their Hangouts data, you may install and use Google Takeout for downloads, before it is no longer available after November.

Google also states that the app will provide a sleek and integrated experience in Google Workspace, considering it has major plans to implement more features in the upcoming months, such as the ability to share and view multiple images, direct-calling, and in-line threading in Spaces. At the same time, making the app compete with other messaging platforms like Telegram, Whatsapp, and many more.

Najlaa Aina contributed to this article.

The post Google Shutting Down Hangouts This November appeared first on Lowyat.NET.