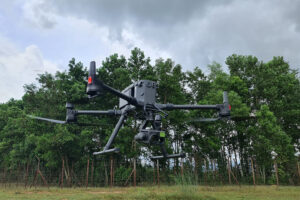 Science, Technology, and Innovation Minister Dr Adham Baba has announced that the government will be deploying 20 high-powered drones to areas affected by floods to monitor the situation and deliver supplies. To operate the drones, the ministry is forming the Drone Services Special Emergency Response Team (PTK2Dron).

Adham said that the drones are being supplied by five private companies, namely VStream, Alphaswift Industries, Aerodyne Group, Meraque Services, and Geo Precision Tech, as well as receiving help from the Malaysia Unmanned Drones Activist Society (MUDAS). He said the drones would be deployed to assist other government agencies in assessing the current flooding situation as soon as the Civil Aviation Authority of Malaysia (CAAM) gives its approval to use these particular drones.

The minister didn’t specify which drone model would be used but said that they are capable of carrying loads of up to 10kg each, including supplies such as food and medicine, and make trips to dangerous and difficult-to-access sites. This would make it easier to detect stranded flood victims who may have lost access to communication networks and require emergency services.

He added that the drones are also being used to determine the water flow’s direction and find blockages that may be causing the flood water to not recede. Torrential floods in several states have displaced tens of thousands of people, with more bodies turning up as the water slowly subsides.

The post Government To Use Drones For Flood Aid Delivery and Monitoring appeared first on Lowyat.NET.