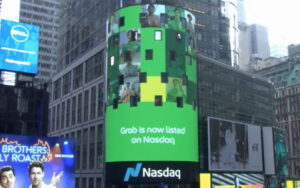 Months in the making, Grab has officially begun trading at the American stock exchange Nasdaq today. The move which is valued at almost US$40 billion (~RM168.8 billion) was made possible through a merger with a special purpose acquisition company (SPAC), Altimeter Growth Corp.

While Nasdaq might be based in New York City, Grab founders Anthony Tan and Hooi Ling Tan together with a group of employees as well as representatives from driver, delivery, and merchant communities rang the opening bell from Singapore instead. This is the first time that a Nasdaq opening bell ceremony has taken place in Southeast Asia.

The company kicked off its journey at Nasdaq fairly well as Reuters reported that Grab’s shares experienced an 18% jump shortly after its debut. It is being listed on the stock exchange under the ticker symbol “GRAB”.

Grab’s story begins in Malaysia as a taxi-hailing app called MyTeksi back in 2012 before transforming itself into a regional e-hailing, food delivery, and fintech giant. Calling Singapore its home since 2014 and has acquired Uber Southeast Asia in 2018, the company currently serves consumers in more than 400 cities throughout eight Southeast Asian countries.

The post Grab Begins Trading On Nasdaq; Off To A Positive Start appeared first on Lowyat.NET.