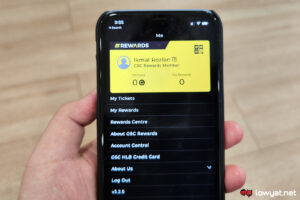 GSC has pushed a new update to its mobile app and website, introducing a new rewards programme. Through GSC Rewards, users can earn GSCoins, its points system, through making purchases, which can then be used to redeem discounts and freebies from the cinema chain.

Of course, this concept isn’t entirely new or groundbreaking, as rival chains TGV and MBO had already implemented a rewards system since ages ago through their MovieClub and StarClub programmes, respectively. All you need to do to join GSC Rewards is to sign into your account and activate your Rewards membership by keying in your details such as your birthday and profession.

Every RM1 spent equals five GSCoins, which means that to redeem a free standard ticket that costs 2000 GSCoins, you would need to spend RM400. Members of GSC Rewards will also get exclusive invitations to premieres, members-only events, contests, and giveaways.

Other rewards up for grabs are Getha Lux Suite passes in KL and JB that cost 16000 and 8000 GSCoins respectively as well as Comfort Cabin and Escape Cabin passes for 12000 GSCoins. You can also get F&B vouchers ranging from RM3 to RM10 discounts starting from 300 GSCoins.

You can earn GSCoins by making either online or on-ground purchases at GSC and Aurum Theatre locations. With that, you must remember to log into your account or scan your member QR code before making a purchase. According to GSC, the coins themselves have no expiry date as long as you maintain an active account, but they will be forfeited if you make no transactions through your account for more than 180 days.

The oddest thing about GSC Rewards is that in its FAQ, it says that you can only earn and redeem GSCoins from 20 July to mid-August 2022. However, GSC’s customer service told us that this period is only for the first phase of the programme, after which they will introduce some upgrades. They also said that customers will still be able to earn and redeem GSCoins even after the stated deadline.