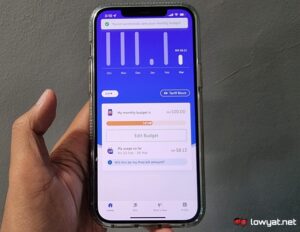 As part of its effort to propel the country into the digital future, Tenaga Nasional Berhad (TNB) has embarked on a massive effort to install Smart Meters across the nation in the past few years. Currently, over 2 million units have been installed in Malacca, Putrajaya, Cyberjaya, parts of Klang Valley, Langkawi and Kuala Nerang. Meanwhile, expansion in Johor and Penang is currently underway.

For the uninitiated, TNB’s Smart Meter may seem unnecessary or a breeding ground for extra costs, but that’s not the case! Not only that the Smart Meter conversion is being done completely free of charge by TNB but users are also provided with smart features through the myTNB app, which allows them to learn and monitor their energy consumption.

Now, TNB has also introduced the new ‘Energy Budget’ feature on the myTNB app to help Smart Meter users save even more, too.

BUT FIRST…WHAT IS TNB’S SMART METER?

What makes TNB’s Smart Meter different from previously used energy meters is that it comes with built-in connectivity. This allows the meter to relay usage data in real-time and subsequently allows users to check their energy usage at any given time through the myTNB app.

This way, you can check your electricity consumption on your phone no matter where you are. Hence, users will be kept up to date with their own energy usage without much hassle.

But while being able to view your energy consumption at any moment’s notice may help with saving on your electricity bill, the act of actual budgeting can get tricky.

HERE’S WHERE THEIR NEW “ENERGY BUDGET” FEATURE COMES IN!

Through the new Energy Budget feature, users can now be more aware of their energy utilisation if it is about to go out of control. Furthermore, it only takes a few minutes to set it up!

First, make sure that you already have the latest version of myTNB app on your Android, Apple, or Huawei devices. Then, just tap on the My Energy Budget that is located on the Home screen of the app.

Alternatively, you can also tap on your home’s TNB account on the same screen. If you manage more than one TNB account through myTNB app, tap on the account that has a small light bulb icon at the end of its name which indicates that a Smart Meter has been installed for the said account.

You should then end up at the section that shows the energy consumption charts for your account. Tap the “v” symbol on the centre bottom section of the screen to reveal the Energy Budget section.

Tap on the “Set Now” button, enter your budget limit for your electricity bill in a month, press “Save New Budget”, and you are done. Just as easy as that.

When you’ve reached 75% to 100% of your monthly limit, the myTNB app will send notifications to your phone, alerting you. But fret not! As you won’t experience any power outage once you’ve reached your predetermined limit, the app merely helps in keeping you on track with your energy budgeting.

The Threshold Notification also comes with tips on how to save more energy so you’re not left in the dark on what to do next. Now, you won’t have to manually keep track of your electricity budget every month.

This article is brought to you by Tenaga Nasional Berhad.

The post Here Is Everything You Need To Know About myTNB’s Energy Budget Feature appeared first on Lowyat.NET.